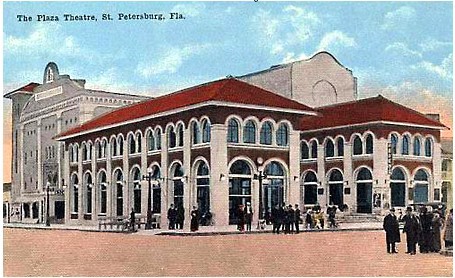 The Plaza Theatre was opened on March 10 1913 presenting the Royal Italian Opera Company for three nights. Located adjacent to the Plaza Hotel, it was later renamed La Plaza Theatre screening movies. Supposedly had a segregated upper balcony area. It was demolished in 1953.

I notice on the postcard photo it is The Plaza, not La Plaza. It does certainly look like a large theatre. Maybe La Plaza (or LaPlaza is it is spelt in the 1941 Film Daily Yearbook) was a small theatre attached to the larger Plaza Theatre that was no longer there from 1941 onwards. Just a thought.

We need someone local with first hand knowledge to help solve this one. What is currently located on the 504 Central Avenue address?

I went to the City of St Petersburg Web site and looked at the City Maps……it appears 504 Central Ave is now a parking lot.

I don’t know the exact size of the Plaza but it was over 2000 seats. In the photo the street going to the right is central ave, while the one going to the left is fifth street. I believe the theater was entered through the arcade on central ave. The central ave part of the theater ( arcade) is now a parking lot and where the auditorium was is the current location of the Holocast museum. The auditorium was located across the theater from the Florida theater.
Until the 1960’s it was not uncommon in the south to have “colored balconies”, especially in small towns that only had one or two theaters

I often went there in the early 50s. It had kids matinees for 9 cents. We became friends with the projectionist and we were able to get in when the first holocaust movies were shown, limited to adults only. I was 7 or 8 at the time. I also remember a friend winning a bicycle by getting popcorn boxtops from the customers.

I had two great aunts who were in vaudeville and played the Plaza in November of 1926. It was part of the Keith circuit of vaudeville.

The rear portion of La Plaza Theatre was demolished in 1957. The front portion (which must have been the arcade leading to the theater) had been demolished in 1955, and the entire complex had been condemned in 1953, according to this article in the St. Petersburg Times of April 9, 1957.

This 1913 article about amusements available in St. Petersburg says that construction of La Plaza had begun in May, 1912, and the 1,800-seat theater had opened in March, 1913, with a series of three operas presented by the Royal Italian Grand Opera company. The article also mentions that there were three movie houses then operating in St. Petersburg: the Rex, the Star, and the Royal Palms.

When I moved to St. Petersburg in 1953, the LA PLAZA THEATRE was closed but still standing. I have been through the entire building. The theatre was entered from Central Avenue between the two buildings with the red roofs and you entered the theatre from its side. As you look at the post card, the large building in the background is the actual theatre with the screen and fly loft being the higher portion of the building to the right of the photo. It was built by Mr. Gandy, the same person that the Gandy bridge was named for. Mr. Gandy wished to bring operas and ballet to the city. Before the theatre opened it was called GANDY’S FOLLY because the local residents said that no opera or ballet company would ever come to St. Petersburg. Well, they were wrong and, Yes, it was a large theatre.