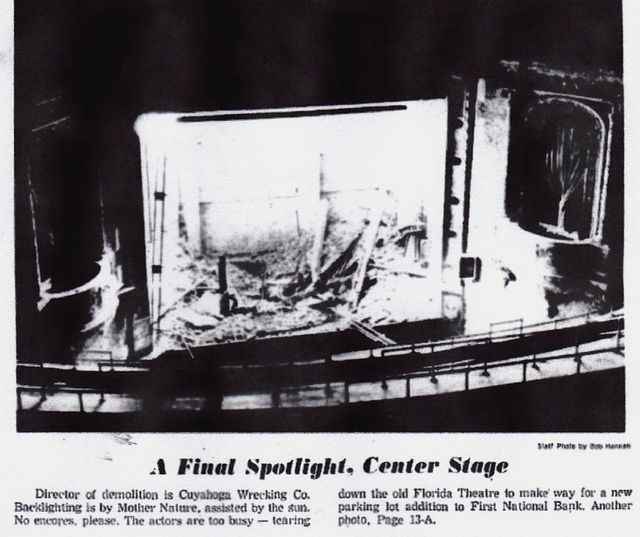 Internet references state this was the first air conditioned theatre in St. Petersburg. It was certainly the largest movie theatre in the town and was designed by architects; Roy A. Benjamin & Robert E. Hall. The Florida Theatre was opened September 10, 1926 with Thomas Meighan in “Tin Gods”. The 3 manual Wurlitzer organ was opened by organist William J. Gilroy.

The Florida Theatre was closed on September 18, 1967. It was demolished in December 1967 for the site to become a parking lot for a newly constructed bank.

Research shows that the following organists have been known to have played the Florida Theatre Wurlitzer: Zita O'Brien (orignally from Chicago and featured at the Picadilly Theatre; in St. Pete, she organized the “St. Patrick’s Morning Musical” in the early fifties at the Florida—featuring area musicians including her console work);
John H. Miller (c. 1951, who featured daily programs at the Florida and also served as registrar for the A.G.O.); Don Berger (c. mid-forties, who was also organist at WTSP Radio. Mr. Berger made news when he was discovered in a car in which he had rigged a hose to end his life with carbon monoxide poisioning in October of 1945; a “Mrs. Crowther” was featured in advertising on June 20, 1927; George Henninger was also featured in the early years of the Florida.

This page includes the photo above and some others, including some of Elvis’s appearance there: http://www.scottymoore.net/StPete.html

I remember taking the bus to Williams Park downtown with friends to go to the Saturday Matinee. 25 cents and 6 RC Cola bottle caps.

The FLORIDA THEATRE was an “atmospheric” theatre. When you sat in the theatre it was as if you were in a Spanish court yard surrounded by buildings with the sky above you. There were BRONKERT “effects” projectors that projected moving clouds on the ceiling. There were also two balconys with concession stands on both the main floor and the first balcony. I own one of the exit signs from one of the rest rooms and it is a “Tiffany” style fixture with leaded glass. I also have photos of the projectors and the 35mm sound reader seperate machine.

When I checked out the Cameo booth, they had Super Simplex projectors, but in the room off to the side were two Brenkert projector heads from the Florida Theatre, which they were going to install in the Cameo. But when I was there, they got two weeks notice on the Cameo, so it never happened.

Mr. Bradley … …Were you a member of Local 552 ? I was a member for many years and was the BA for nine years. Do you live in the Tampa Bay area now ?

No, I was a member of Richmond, VA, Local 370. I was going to relocate in St. Pete in 1969 and join 552. Cecil Fernandez, the business agent who worked at Plaza 1, sent me to the Cameo and State to familiarize myself with the booths, but both theatres got their closing notices, so I returned to Richmond.