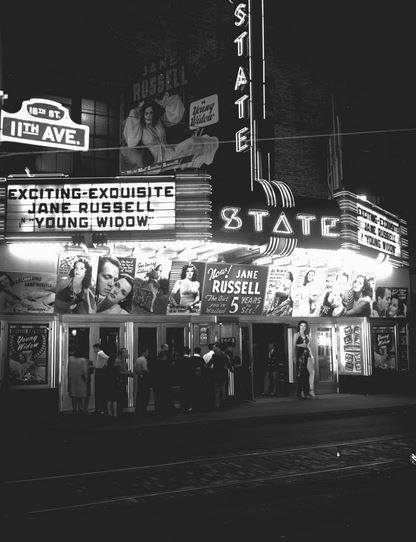 The New Victoria Theatre was opened on July 20, 1922 with Owen Moore in “Reported Missing”. It was taken over by Wilmer & Vincent Corp. and renamed State Theatre on September 19, 1925, reopening with Harold Lloyd in “The Freshman”. It was equipped with a Marr & Colton organ. It was closed in October 1971. It was demolished in May 1972.

A Marr & Colton organ was installed in this theatre in 1925.

During an urban renewal project, the State theater was
demolished in 1972.

This appears to be the photo to which Patsy refers in her comment of of November, 2005

Anast N. Notopoulos took on the Gamble-Paramount two blocks from here in 1919 closing it July 23, 1919 for a major refresh. He gave it an entirely new interior and exterior look and renamed it the New Victora Theatre opening on November 15, 1919 for what turned out to be a temporary stay of just over a year.

It turned out Notopoulous would have bigger ideas for the Victoria. Creating a steel interior theatre costing $1 million by local architect Walter Frieling, a new, New Victoria would open at this location at 11th Avenue and 16th St.. Meanwhile, the Gamble/short-term New Victoria Theatre would be renamed from the Victoria to the Capitol Theatre opening now with a Greek architectural theme on March 17, 1921. But the New Victoria fell well behind schedule.

The New Victoria, itself, finally opened on July 20, 1922 with Owen Moore starring in “Reported Missing.” In 1923, the Victoria became a publicly-held entity called the Victoria Theatre Corporation likely trying to recoup its over one million dollar and behind-schedule investment. That company went bankrupt quickly in 1924 and was disbanded in 1925. Wilmer & Vincent Circuit took over the bankrupt property giving it a major refresh and relaunching September 19, 1925 as the renamed State Theatre. The State opened with Harold Lloyd in “The Freshman” and music from the $35,000 Marr & Colton organ with J.F. Keith at the console. The State installed sound and then widescreen to stay competitive lasting to the Victoria/State venue’s 50th Anniversary. But at the end of its 50-year lease, the theatre closed in 1971 and was demolished a year later.