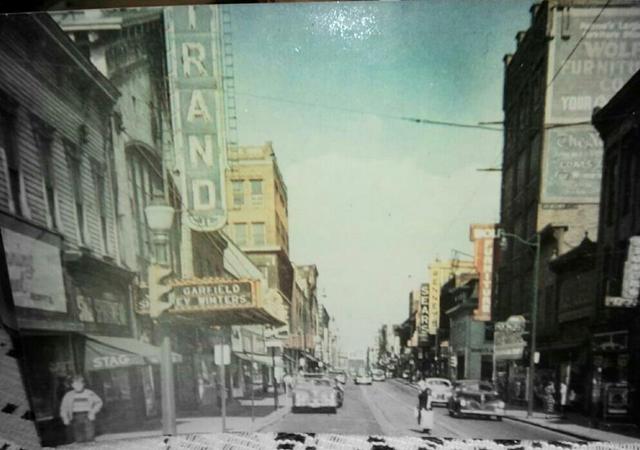 The Strand Theatre opened May 29, 1916 with Pauline Frederick in “The Moment Before”. It was equipped with a Wurlitzer organ. It was renamed Warner Theatre on August 15, 1930, but by the mid-1940’s had reverted back to the Strand Theatre name. The Strand Theatre is not listed in the 1955 Film Daily Yearbook so it might have closed in the early-1950’s. It was demolished in August 1962.

The Strand was operated by the Silverman Brothers. Isaac “Ike” Silverman had opened Altoona’s first movie house, a nickelodeon called the Pastime Theatre, in 1906. He closed the Pastime in 1917, the year after opening the Strand, which was on the same block as the Pastime.

I came across a PDF file in the Pennsylvania State University’s digital library. Published in 1922, it is a program booklet published for a local event called Old Home Week, and it mentions ten Altoona theaters by name, and includes an illustrated advertisement for the Strand on page 49. Unfortunately it gives no addresses for any of the theaters, but the ten it mentions were:

The PDF is in three parts:
Part 1 includes the list of theaters, and also has a picture of the Mishler.
Part 3 has several ads (all of them text-only except for the Strand’s ad) for several theaters.
Part 2 doesn’t have anything about theaters, but is interesting in any case.

Another missing (or not aka'ed) Altoona Theater is the Sun, listed in the September 3, 1949, issue of Boxoffice as being under renovation by Lewis Hausser.

This opened on May 29th, 1916. grand opening ad uploaded on this page.

This was renamed Warner on August 15th, 1930. Grand opening ad in the photo section

The page needs updated with the aka Warner Theatre, per the 1930 ad rivest266 uploaded. The naming had to have been temporary, though, as we also have a photo of the house with the Strand vertical above a marquee advertising the 1945 release Of Human Bondage, and 1940s era cars in the street. Another photo has John Garfield and Shelly Winters paired on the marquee, and I believe the only movie in which they co-starred was the 1951 release He Ran All the Way.

The Strand launched with Pauline Frederick in “The Moment Before” on May 29, 1916. Warner Brothers Circuit took on the venue after a refresh with Vitaphone sound and the Richard Barthelmess film, “The Dawn Patrol” on August 15th, 1930. On March 10, 1933, Warner Brothers dropped the theatre.

The Silverman Brothers took over the venue briefly as Silverman Brothers' Warner Theatre on March 19, 1933. On November 9, 1933, the Silvermans changed back to the Strand Theatre moniker with Paul Lukas starring in “Captured.” The Strand closed on October 10, 1954 with a double-feature of “Three Forbidden Stories” and “The 39 Steps.”