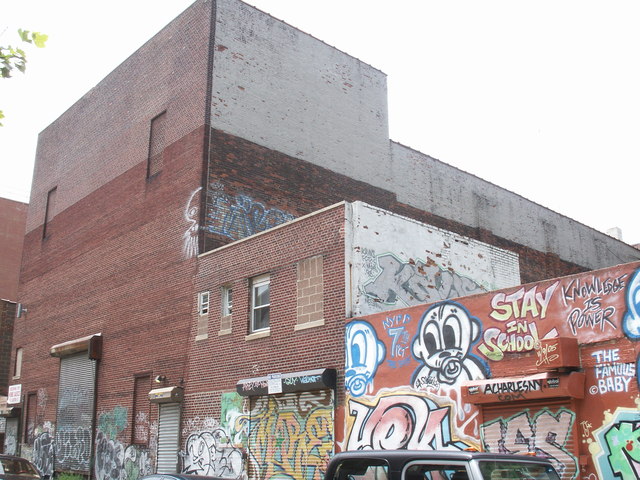 Built for the Islloderman & Cohen Amusement Co. The Clinton Theatre was opened on February 1, 1919 with six acts of high-class vaudeville and the latest Broadway photoplays. Just prior to opening, the owners were unsure whether the vaudeville would be Yiddish or English. The original seating capacity was given as 1,800. The entrance was through an already existing tenement building, with the auditorium built at the rear, backing onto Attorney Street, where there was a fully equipped stage house. By 1926 it was operated by the Meyer & Schneider circuit.

Later seating statistics said there were 797 first floor seats, 283 balcony seats, and 182 box seats. It was in operation through 1950. In early-1951, it was converted to retail and office space by the Brandt circuit.

Today, a supermarket operates in the former orchestra level, with a false ceiling extending forward from the front of the balcony to the proscenium. The balcony and theatre auditorium was still intact (minus seating) in the early-2000’s, in use as a recording studio, with the former stage house also intact, and used for storage. This later became a nightclub.

The Clinton Star Theatre is listed in the American Motion Picture Directory 1914-1915, so it was operating with movies several years before 1917. It has gone from listings in the 1950 edition of Film Daily Yearbook, so I would think it had closed by 1949.

Looking at the building today it hard to imagine there was ever a theatre in what looks like a tenement building. But years earlier when the Clinton was in operation there was a large vertical sign on the front of the building and also a marquee over the entrance where now is a ‘Home Basics’ sign. Enter Home Basics store and you will see the decorative plasterwork of the underside of the balcony on what would have been the rear orchestra section. Further into the store there are remains of the decoration on the walls, but a false ceiling has been put across.

You see in the centre of the photograph a green painted entry door with a gentleman sitting outside. Through this door and up some stairs leads to the apartments, but there is a ‘pass door’ which leads into the former balcony of the theatre. Four years ago I had the privilage to be able to go inside though the pass door and into the former balcony space (then in use as a video/sound recording studio). All the upstairs decoration was still in place on the walls and ceiling, although where the seats had been was just bare steppings. The void in front of the balcony had been filled in (over the former front orchestra area where downstairs in the Home Basics store is the false ceiling). The new balcony level floor now extends to the proscenium arch. From here it is possible to go down a ladder and onto the stage. There are still in place old drapes and fragments of scenery hanging from the bars in the stage house. I took some photographs (pre digital) and will look them out sometime and post up any which came out with reasonable clarity.

Looking around at the rear of the building is the bulk of the auditorium and the stage house, photographed here in June 2006:
http://www.flickr.com/photos/kencta/188952118/

It has been reported that a “secret” nightclub is now occuping the theater space.

Well, I look out my window at the back of it every day and oft wondered if there was some grand old beauty that got buried there. My wandering in the building(s) led me to believe it was unlikely. The front, what would’ve been the entry and lobby are a 99 cent store. The back, which the pictures show nicely, is actually a recording/rehearsal studio and I see bands coming and going from there often. From what I’m told, it’s just the former stage and fly space portion that have been cordoned off and are used for the task. Maybe that tall ceiling makes the room sound interesting to record in?

Cinema Treasures has no theater listed at the Attorney Street address. Does anyone know if that second project was carried out or not?

Joe; Looking at a Google street view of 103 Attorney Street, it is almost in the same position as the stage house of the Clinton Theatre. Of course it could be adjacent to it, or even across the other side of the street (not knowing which side is odd or even numbers).

Maybe Blinderman & Cohen purchased land behind the Clinton Street tenements, and built the Clinton Theatre with access from Clinton Street, but were unable to gain similar access through the tenements for the plot of land, so it was accessed from Attorney Street. (this is of course if it ever was built!) Nothing listed in the 1926 edition of Film Daily Yearbook

Ah, if the parcels actually back up to each other then I think I know what happened. Blinderman & Cohen announced that they were building a theater that would be at 80-82 Clinton Street and at 97-103 Attorney Street, and somebody at MPW mistakenly thought that it was two different projects. It was just the Clinton Theatre, running through the block to Attorney Street.

The difference in the numbers probably threw them off, just as it did me. I’d thought that 97-103 Attorney would be several doors farther north than the property behind 80-82 Clinton.

“Interest in the real estate market yesterday centred upon the sale of an east side theatre and tenement property. The Blinderman Cohen Amusement Company, lessee of the premises, bought 80 and 82 Clinton Street, extending through to 97 to 103 Attorney, from heirs of the Martin Grossman estate.”

Vanity Fair has a photo essay on the current recording studio there. A pal had mentioned he was there once for a party and was amazed at the space. http://www.vanityfair.com/culture/2014/04/j-ralph-studio-tour-photos