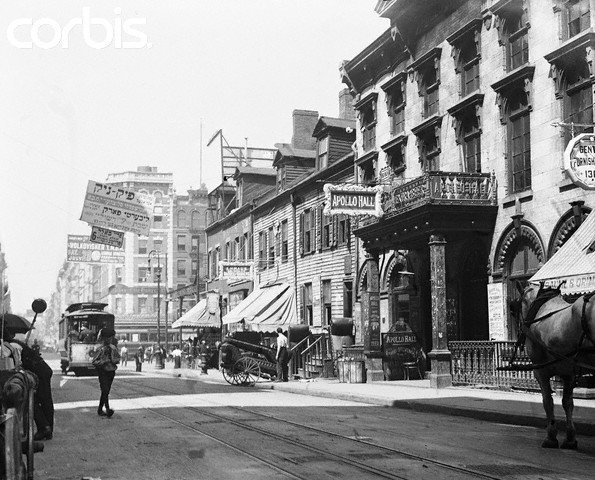 This was entered as a comment from another Apollo Theatre, at 125th Street, first posted by RedDawg

(A certain Wurlitzer) “was actually installed in a different Apollo Theatre at 126 Clinton Street, NYC. There is likewise no information on the status of this theatre that I can find.”

Opened by 1900 as the Apollo Hall, the Lower East Side Apollo Theatre was a 1,788-seat independent theatre near bustling Delancey Street. By 1927 it had been taken over by the Meyer & Schneider circuit. Loew’s Inc. took over in the 1930’s and ran for about ten years before closing it as a substantial loser. It reopened under independent management and continued to operate until at least the 1970’s.

The Apollo Theater on Clinton Street south of Delancey Bridge traffic was still open in the 1950’s and 60’s. It was known for it’s “Always a Western” sign. One of the three featured movies was always a Western.
It was closed temporarily, changed management or something, but it was still operating in the 70’s and I think the 80’s as well.

The Palestine changed it’s name to the Winston in the 1960’s.

None of the old 42nd Street theaters was nice by the time I started frequenting them in 1967, but as an out-of-towner who knew that a movie could play in only one theater in a “zone” at a time, I was fascinated to find first-run movies playing with companion features in dumpy 42nd Street houses while the same new films were running at higher prices just around the corner on Broadway and Seventh Avenue.

Are there any pictures of this movie theater.

Checked Google Maps. Nothing there but acres of parking lots.

I and my friends used to cut through the construction area that became the Seward Park Houses to go to The Apollo theater in the late 50’s and early 60’s. We paid 35 cents to see three feature films. They make up part of a lot of precious memories of my childhood growing up on the Lower East Side of NYC.

BTW – here is a link to my FaceBook where I have posted what might be the only picture of this Apollo theater when it was called: Apollo Hall in 1900!
View link

Thanks for the cool picture, geneser1.

Here is the Apollo Theater after it was taken over by Loew’s, The photo is from a still from the Movie “Naked City” shot in 1948.

This area, the former site of the Apollo, is now being redeveloped as the massive “Essex Crossing” project which will include a multiplex cinema.