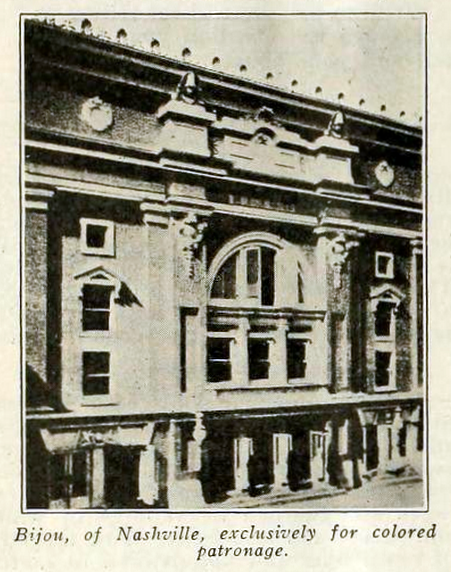 Located on the West side of 4th Avenue North, midway between Gay Street and Charlotte Avenue. Built in 1904 by Jake Wells on the site of the former Adelphi/Grand Opera House. The Bijou Theatre was opened on September 14, 1904 as a stock company playhouse for white family patronage. Seating was provided for 1,642 in orchestra, two balconies and boxes. It never did well in its 4th Avenue neighborhood which was then becoming increasingly African-American, and Wells closed the theatre in 1913, putting it up ‘For Sale’

In 1916 Michael & Milton Starr first leased the vacant theatre, and purchased it the following year, where under Milton’s management it was converted into a movie theatre for exclusively African-American patronage. Milton and later Alfred Starr built up a chain of some 45-50 theatres throughout the South, under the name Bijou Amusement Company. The Bijou Theatre became the Nashville flagship of the Bijou Amusement Company, one of the first African American theatre chains in the south. Stage acts were booked through TOBA (Theatre Owners Booking Association). From 1923 to 1925 Bessie Smith appeared regularly at the Bijou Theatre. At a midnight matinee in 1926 the Bijou Theatre became a segregated theatre when Milton Starr allowed whites to sit on the main floor and directed African-Americans to sit in the balcony. Ethel Waters also appeared here as did “Ma” Rainey, and in the 1930’s Count Basie performed on the stage. In its later years it was operating with 800-seats, possibly by closing one or both of the balconies & boxes. For close to forty years, the Bijou Theatre featured both live performance and film until it was razed in 1957 for construction of the new Nashville Municipal Auditorium.

I just happened to run across a 1916 trade mag with mention of Nashville’s Bijou (recently opened) and Elite (I assume the one on Fifth Ave.

Bessie Smith played here in 1927. There’s a great story of her chasing Eggie Pitts down the street in a mammy costume.

Linkrot repair: The 1957 Boxoffice article about the closing of the Bijou can now be found at this link.

The Nashville Bijou was originally built for Jake Wells' Richmond, Virginia, chain the Bijou Theatre Company. Beginning in the mid-1910s, Wells gradually retrenched to his Virginia holdings, selling off houses throughout the south to other firms. The Nashville Bijou was one of several theaters that were picked up by the Starr Family’s Bijou Amusement Company.

The September 15, 1904, issue of the Richmond Times Dispatch ran this item about the opening of the Nashville house the previous night:

“Manager McKee, of the Bijou Theatre, received a message from Manager Jake Wells, at Nashville, Tenn., last night, in reference to the opening of the new Bijou Theatre at that place. The message stated that the opening was entirely satisfactory, and that the house was crowded with an enthusiastic audience to see Walter Edwards and his fine company in a revised edition of the ‘Sign of the Four.’ Mr. Allan Jenkins, formerly of this city, and well known here as a newspaper and theatrical man, is the local manager of the Nashville house. The new Birmingham theatre, of the Wells circuit, was opened most successfully on Monday night, with the ‘Midnight Marriage Company.’ Mr. Mortie Seamon, of this city, is the local manager of this theatre for Manager Wells. The new theatre here will be ready for the opening Thanksgiving week. The attraction has not yet been settled upon, but Manager McKee said last night that one of the best of attractions would be offered. Manager Wells will be back in Richmond about Saturday.”During this period when Jake Wells was rapidly expanding his chain, the new theaters being built for the Bijou Theatre Company, including the Nashville Bijou, were designed by architect Fuller Claflin of the New York firm the Amalgamated Theatre Building Association.

I am doing research about my grandfather Milton Starr. He owned this theater for a long time. The comments above are very interesting. I’d like more information if anyone cares to comment further. Thanks !

I grew up in North Nashville just west of the Capitol at 13th and Pearl street. My brothers and sister attended Head School and watched movies at the old Ace theatre located at 11th and Cedar Street, now called Charlotte. We later heard of the Bijou theater and asked Mother if we could go after church on Sunday. On entering the Bijou we were startled that it was so huge and clean compared to the Ace theater. The Bijou also had a massive refreshment area with lots of goodies. We fell in love with this theater and attended most Sunday’s. I will never forget this Nashville icon for African Americans.

I don’t find the Ace listed here but I remember it. It was built by Bill James and managed by the Starr brothers- Alfred and Milton. After it closed the building sat unused for years, overgrown with vines and bushes.

Judith: Very interesting and many thanks. From your name I wonder if your father was one of the Starrs mentioned in the case and also mentioned on this site.

If so, would you tell us if Bijou Amusement Co still exists and still operates other theaters.