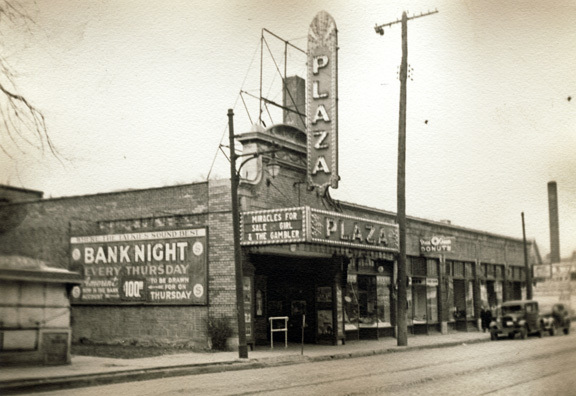 The Plaza Theatre was a neighborhood theatre on E. 152nd Street in the Collinwood neighborhood near Five Points. It opened December 24, 1927. It closed in 1961 and was demolished. A post office now occupies most of the site.

Was just watching “The Muppets Take Manhattan” on DVD and Skooter writes Kermit about him working at a theater in Cleveland. The marquee says it’s the Plaza. So I looked on here. That movie was in 1984 and the Plaza featured could’ve been AnyCity USA but I thought I’d post this anyway.

The New Plaza Theatre was launched on December 24, 1927. It competed with the nearby Five Points Theatre that had opened in 1920 as a Fall to Spring non-air conditioned house. The competitive situation didn’t work for either theatre and they merged concentrating their efforts at the newer Plaza.

They used to give kids old candy bars if they would leave after the matinee. The candy store next to The plaza sold popcorn for 5 cents less than the theatre and the theatre let you bring it in!