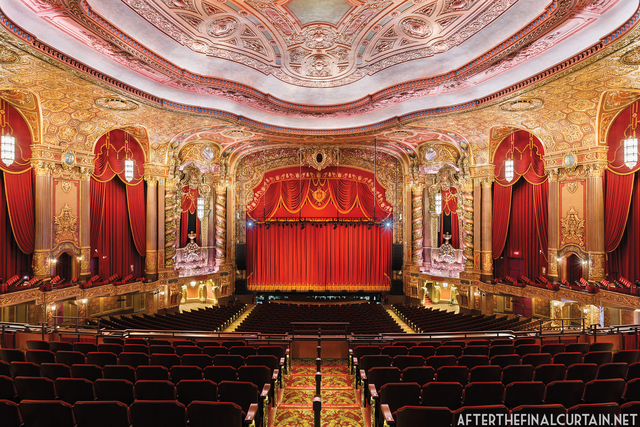 Loew’s Inc. dominated the market in Brooklyn, and this was their flagship in the very grandest French Renaissance style designed by the prestigious architectural firm of Rapp and Rapp of Chicago and architect Edwin C.A. Bullock working out of the New York office of the compamy.

The theatre occupies a massive site built diagonally across an odd assortment of lots and had an original seating capacity of 3,676. The main façade is arched and is faced with richly decorated terra cotta. There is a vast entrance lobby that opens onto an even more spacious inner lobby and then on to a foyer at the rear of the orchestra level. An unusual feature of the auditorium is the majority of the seating is in the orchestra level. There is no balcony but instead a shallow mezzanine seating 878, that is entered by stairs off the inner lobby.

The mezzanine level lounges overlook the entrance lobby. The paneling in the lobby areas is real mahogany and throughout instead of crystal chandeliers there are massive stylized Art Deco style light fittings with elaborate etched glass and tassels.

The sumptuous interior decoration was the work of the Harold Rambusch Studios of New York under the supervision of Ann Dornin of Loew’s Inc. The mezzanine seating area is set way back in the very high auditorium creating a luxurious and spacious feel, even though it is crammed with detail and lavish velvet draperies. There are Corinthian columns and magnificent murals in alcoves on the side-walls depicting scenes from the Royal Court of the Bourbons. The proscenium opening is 60 feet wide and the stage has full facilities. The Robert Morton ‘wonder’ organ had 4Manuals/23Ranks. Loew’s Kings Theatre boasted it was the first movie theatre to be opened in America that was specifically designed for ‘talkies’. Originally presenting stage shows with the feature film, this programing disappeared in the Depression and the theatre remained film only for the rest of its life. The Loew’s Kings Theatre had a gymnasium and basketball court located in the basement, which were provided for the use of the theatre staff. In the 1950’s a young local girl Barbra Streisand worked in the Loew’s Kings Theatre as an usher.

The Loew’s Kings Theatre had a steady decline from the 1950’s onwards and managed to last into the mid-1970’s before it was forced to close due to poor attendances. The Robert Morton ‘wonder’ organ was last played in January 1974 by organist Lee Erwin, and it was removed from the building, donated by Loew’s to New York University. The theatre was never divided and remained virtually unchanged throughout its history. Loew’s Inc. relinquished the theatre on April 25, 1977 and basically locked the theatre and left it. The final film was George C. Scott in “Islands In the Stream”. However it was sold to an independent operator and reopened in early-June 1977 as the Kings Theatre with Leslie Nielsen in “Day of the Animals”. The theatre was not paying its way, and it was closed just six weeks later on August 29, 1977 with “Bruce Lee:The Man, The Myth”.

Over the years this most stately monument just sat and deteriorated quietly on Flatbush Avenue. There were controversial plans to convert the building into community use, a shopping mall and even demolition. In March 1999 it was announced the building would undergo a $30M restoration to convert it into a 12-screen multiplex for Magic Johnson Theatres to open in 2001. This scheme was dropped in late-2000 due to financial difficulties. The marquee remained over the entrance but the huge vertical sign on the façade was removed in the late-1990’s for safety reasons. Taken over by the Flatbush Redevelopment Corporation, the building had waited over 30 years for a revitalization. Its interior was still majestic despite the ravages time, vandals and water damage.

In January 2010, plans were announced to renovate the Kings Theatre as a live performance theatre by the Houston based ACE Theatrical Group. The $94M renovation/restoration work began on January 23, 2013, and was completed on January 27, 2015 when a preview event was due to be held featuring Brooklyn Ballet, Brooklyn Youth Chorus, TriBeCaStan and the Casym Steel Orchestra, unfortunately the was cancelled due to heavy snowfall. On February 3, 2015, a concert by Diana Ross officially reopened the Kings Theatre.

The Kings (lobby and auditorium) is featured in the movie Joker. (The exteriors and bathroom were shot elsewhere.) It looks fantastic (as it does in real life — I was there with the THS tour this summer.)

Great movie. Didn’t know they filmed it there. Now I can visit that place soon…

Live in NYC and never hear of anything happening here.How do they hang on? Brooklyn Paramount redo a casualty of Co Vid .Wonder if it officially dead .

Pretty sure the Paramount was dead before Covid.

Events happen at the Kings all the time. I’d suggest following their social media pages if you want to see what’s going on.

Thanks. Where do things stand re Paramount after LIU pullout?

Due to the upsurge in COVID cases, NYC’s Mayor-Elect Eric Adams has moved his January 1st inauguration ceremony from the Kings Theatre to the open air of Times Square shortly after the 2022 Ball drops at midnight. More details here