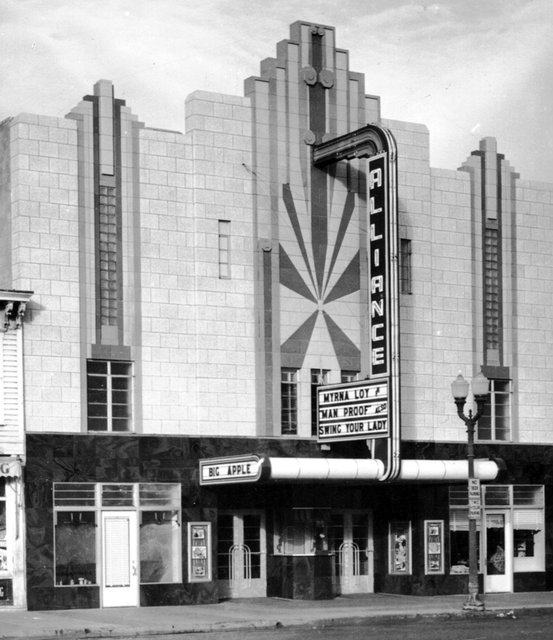 It is shown as open in the 1945 Film Daily Yearbook, with seating for 869 and at that time operated by a subsidiary of Fox Theatres.

It may be haunted:
http://tinyurl.com/yul3zw

The Alliance looking sharp in 1989 – how did this single screen venue acquire four more auditoriums by 2009?
View link

The Alliance was a 1937 rebuild of an older theater called the Imperial. Fox Intermountain had recently opened the rebuilt and renamed house, according to Boxoffice of November 20 that year. The Imperial had already been completely remodeled before, as reported in Movie Age of January 19, 1929.

Fox Intermountain was still operating the Alliance when the house was reseated in 1956, reducing capacity from 900 to 756, according to Boxoffice of June 2.

Updated and remodeled again in 1976, the Alliance was then being operated by Commonwealth Theatres, as reported in Boxoffice of October 11.

I’ve found nothing in Boxoffice about the multiplexing of this theater.

I’m not doubting that the theater was multiplexed, just saying that I can’t find anything in Boxoffice about it. I had hoped to find an item that would reveal the year that it was done, and that might give the new seating capacity.

The photo on the May 2009 message was taken in 1989 – so sometime after then for the renovation.

Passed through Alliance, NE yesterday after a trip to Badlands National Park. Glad to see the theatre is still bustling, folks were exiting the Sunday afternoon screenings as I shot some pictures (new pics in the Photo section). Carhenge, located a few miles outside of Alliance, is worth a visit as well.

The NRHP Registration Form for the Alliance Commercial Historic District says that the Alliance Theatre was designed by Denver architect Walter H. Simon.