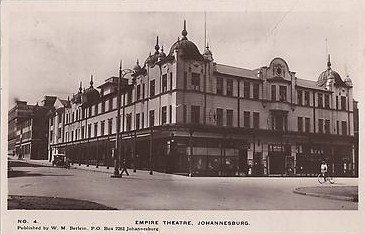 The Empire Theatre was situated in Commissioner Street (corner Kruis Street) diagonally opposite the Colosseum Theatre. It was built during the mid-1930’s (possibly on the site of an earlier Empire Theatre?) and formed part of the African Consolidated Theatres chain. It was used during the 1950’s and 1960’s alternatively as a live theatre venue and presented such Broadway smashes as ‘My Fair Lady’ (with Diane Todd) ‘West Side Story’ and ‘Fiddler On The Roof’. It was also the Johannesburg home of the fabulous minstrel shows devised by Joan Brickhill and Louis Burke.

The auditorium had both stalls and circle seating and when used as a movie theatre had a single screen set halfway into the vast stage area.

The building was demolished in the early 1970s to accommodate a new three-cinema complex known as the Kine Centre.