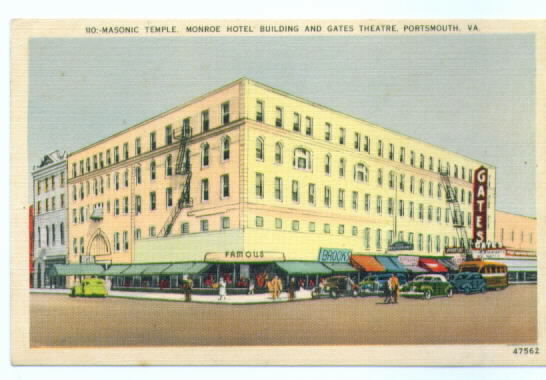 This theater, which was located on High Street, was originally opened as the Lyceum Theatre in 1900. It was renamed Orpheum Theatre around 1908 and continued until 1922 when it was damaged by a major fire. It was rebuilt to the plans of architect Charles M. Major. On August 29, 1928 it was renamed Gates Theatre, it closed in the late-1950’s, and has since been torn down. In the 1945 Film Daily Yearbook, the Gates Theatre is shown as open with seating for 726.

On the night of Thursday, April 19th, Mrs. J. B. Shipp, of Portsmouth, assisted by leading Norfolk and Portsmouth singers, will open the beautiful new Portsmouth Lyceum Theatre with a production of Willard Spencer’s pleasing American -Spanish comic opera, “The Princess Bonnie.” This promises to be a very notable social event, as Portsmouth is very properly proud of her handsome new playhouse.

The office building that has been cut off Hotel Portsmouth will be known as the Commercial building.

The Commercial building is nearly completed. The work of fitting up the entrance and putting in the elevator will be comenced very shortly.

A large office building to be known as the Commercial Building has been fitted up with seventy rooms in it. The building will have all modern conveniences, including elevator, electric lights, steam heat, etc.

The Hotel Monroe will not be ready for occupancy before March 1st. As yet no one has been selected to run it.

I found this item from 1902. Apparently the opening of the Hotel Monroe was delayed for a year. There are no Virginian-Pilot newspapers available for 1901 to explain what was happening.

The opening of the Hotel Monroe in Portsmouth last evening was in the largest sense a perfect success. The doors of the elegant hosterly were thrown open early in the evening, and the public began to arrive immediately.

Many Portsmouth people as well as a number from Norfolk enjoyed the first meal served at the new house. Some of them let their cooks off and took their entire families to the Monroe for the evening.

The house looked beautiful under the radiance of the electric lights, and expressions of surprise and pleasure were heard on all sides. The Portsmouth people were delighted with their first glimpse of the new hosterly.

The newspaper articles indicate the theater was a wing running north to Queen Street which is what you had deducted. In fact the article about the Lyceum fire states the theater was on Queen Street which is where the auditorium must have been. One of the articles from 1899 mentions a proposed conservatory that was to be located on the vacant lot between the theater and the hotel. That could explain why a tree is visible near the Masonic building in the photo’s from the 1950’s. Even if the conservatory was never built, perhaps a garden was. Does the tree indicate the Gates Theatre used the same site as the Lyceum?

The newspapers state the Lyceum Theatre and Commercial Building opened in 1900 and the Hotel Monroe(formerly Hotel Portsmouth and Ocean House) opened in 1902.

After the renovations and new construction were completed between 1900-1902(?), the building seems to have been composed of three distinct sections, Hotel Monroe, Commercial Building, and Lyceum Theatre. I found offices in the building through at least 1930. The 1931 city directory list the office building as the Commerce Building at 322 High Street, the same address as the Gates Theatre. All room numbers were in the 200 series indicating that by 1930 the Commerce Building was confined to a single floor. Not sure if the 200 series would indicate the 2nd or 3rd floors. Some of the listings were; room #230 vacant, #231 Charles M. Major architect, #232 vacant, #233 Provident Relief Assn, #235 Max Aaron tailor, and so forth.

Thanks for the extensive research, norfolk356. So we have this house opening as the Lyceum Theatre in 1900, being renamed the Orpheum sometime between 1907 and 1909, and being rebuilt following major fire damage in 1922. It’s interesting that in 1931 architect Charles M. Major, who drew the plans for the 1922 project, still had his practice in the office portion of the building.