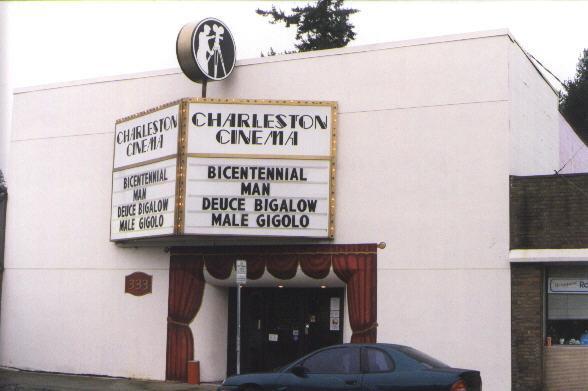 The Colonial Theatre was opened by 1931. It was listed as (Closed) in 1933 to 1935. By 1936 it had reopened as the Grand Theatre. In the early-1980’s it became the Playtime Grand Theatre, screening adult movies. It went back to regular movies around 1986 and closed soon after. It briefly reopened for a few months. The building then stood unused for eight years until it was reopened as the Charleston Cinema, this later had fallen into decay but was still showing films up to early-2005. The couple, Eric and Frances Meyer, who were last to run it threw in the towel and let it be taken over for use as a club called Gstyle Knights Nightclub, and they immediately mucked up the marquee so it wouldn’t even resemble a theatre anymore, painting their club name on it in freestyle lettering.

Yet the Meyers focused on children’s and family films always third-run and discount. For a while they had retro “Rocky Horror” first-Friday-and-Saturday of each month, and even had free matinees striving to serve the community as well as humanly possible. But nothing they did would bring in reliable audiences; they couldn’t even give the tickets away.

The Meyers' valiant efforts to keep the theatre alive included trying to start up a flea market and waging a campaign to get 1,400 people to donate $100 each to save the cinema, but getting other companies to underwrite free matinees was a great idea. If they’d had more knowledge of cinema they might have filled a missing niche in this area for independent cinema, foreign films, mini-festivals like of samurai films or Luis Bunuel – there would’ve been no competition. But trying to be family oriented in a neighborhood with no parking but plenty of porno and rifles never worked. They were heroic to last five years.

By 2010, the Charleston Cinema had reopened. By summer of 2016 it had dropped movies in favour of live performances.

In late 1986, the Moyer chain got into a spat with Paramount pictures. For a while, they either refused to run their films or were cut off by the studio. Being the only non-chain theatre in town, the Charleston enjoyed a short lived bonanza, booking “Crocodile Dundee” in September, and “Star Trek, The Voyage Home” in November. For a while, the only place you could see those films was at that one theatre, and naturally, it was packed! The owner siezed on the opportunity and engaged in an aggressive campaign to sell the place as a “hugely profitable first-run theatre”.

Unfortunately, nobody bought the place, the Moyer company made up with Paramount, Paramounts pictures returned to the chain houses and the Charleston was once again relegated to sub-run films. It closed soon after.

Several years later, the owners of the local “Rodeo Drive-In” reopened the theater, attempting to establish it as a neighborhood discount house. However, they experienced the same lackluster attendance the previous operators did, and closed the theatre within a few months.

8 years later, The theatre was reopened under the ownership of the Meyers'. That story is told in the posts above.

Is this theater just sitting there empty? Is it for lease or for sale?

The “G-style Knights” business has closed, and the theatre is once again available. Whether it could be used as a theatre is questionable though. The owners leveled the floor in order to convert it to a night club. They have said it could be restored, though one would question whether it would be worthwhile.

At this point, pretty much everything has been tried there… first run, sub run, discount, art/independent and live. Its size, location, surrounding businesses and lack of parking may make it difficult to run a successful theatre. However, there’s always someone out there with a new idea, and the building is for sale if you think you have the magic answer!

On my way to the Admiral Theatre in Bremerton last Friday, I passed by the Charleston Cinema… and it was OPEN.
I also like the unusual old projector image above the marquee. Hey, good for them.

The Bremerton Cinema (adult movies) is just a few doors to the left of this theater.

The Charleston has been here since 2008. All ages music hall, with bar in the back. Open Thursday – Saturday only, cover charge is usually $5. It appears that the screen is still up and they are only using the very front part of the stage.

Status should be closed. Only a live performance venue now.

Grand and Playtime Grand should be added as previous names as mentioned above. Two photos as Grand Theatre added to the gallery, courtesy Colleen Moore.

An interesting and historic June 1999, Letter to the Editor (Bremerton (Kitsap) Sun) regarding the Charleston Cinema.

We asked for it; support it

Last year, Eric and Frances Myers purchased the Charleston Cinema which had been vacant and an eyesore for more than eight years. They completely revamped and improved the theater. It is tastefully decorated and very clean. They provide quality movies at a very affordable price.

Many people have been amazed by the fact that they are still open and have wondered how they have succeeded thus far.

It is most certainly not because of the overwhelming support from our community. In fact, if it were not for their commitment to this endeavor, they would have been out of business long ago!

The Myerses have had to reach further and further into their own pockets and receive financial assistance from family members to survive. Only their sheer will-power and belief that the Charleston Cinema is a much needed, positive asset for our community, has kept them in business.

As a longtime resident of Bremerton, I am familiar with the history of the Charleston business district. I was here when it was beautiful and in its glory. I slowly watched it decline and finally fall. More recently, I have watched it struggle, stumble, get back up and become the kind of community that I am proud to be a part of.

I am ashamed of this community. We were all there picketing when “Playtime’s Grand” was operating as an adult theater. We all rejoiced when it was finally closed down. We have all raised our voices to complain about the lack of quality, affordable entertainment available in West Bremerton. Now that we have what we wanted, what are we doing?

We need to start supporting the Charleston Cinema and each of us also should personally thank the Myerses for believing in and enhancing our community!