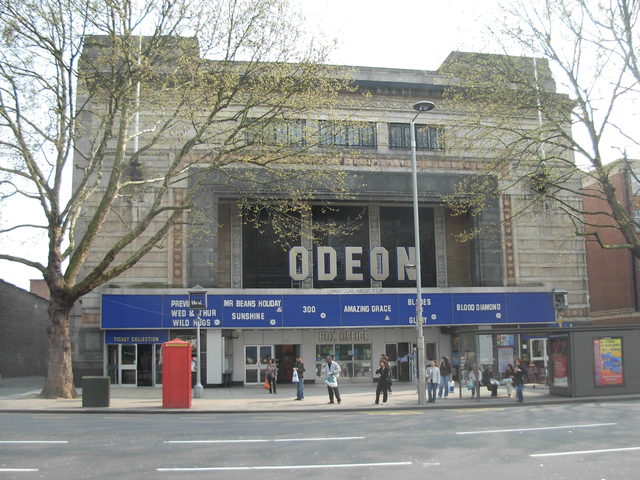 Located in the west London inner city district of Kensington. The Kensington Kinema opened on 3rd January 1926 with Harold Lloyd in “College Days” & Adolphe Menjou in “A Kiss in the Dark”. On stage were American entertainers Layton & Johnson. It had an original seating capacity of 2,370 in stalls and circle levels. It was built for and operated by the small Joseph Mears circuit and like their other cinemas was built in an affluent area of London and named after the district eg: Sheen Kinema, Twickenham Kinema & Richmond Kinema, which all later became Odeon’s.

The Kensington Kinema was one of the earliest steel framed buildings to be built in the UK, a method of construction that became prevalent with cinema buildings in the 1930’s. The imposing Neo-Classical style façade in Portland stone is dominated by a huge deeply recessed entrance, reminiscent of a proscenium opening. The interior was decorated in what could be described as Neo-Greek style which had a coffered ceiling. The Kensington Kinema was equipped with a Christie 3Manual theatre organ. The Kensington Kinema also had a restaurant for the convenience of its patrons.

It was re-named Majestic Cinema in July 1940 (in case German parachutists would identify their whereabouts) and it was closed, and taken over by the Government for war-time storage.

It was taken over by Odeon Theatres Ltd. from 3rd January 1944 and was re-opened as the Odeon on 9th October 1944. Over the years it has undergone several modernisations internally, first in August 1965 when the seating capacity was reduced to 1,894 in stalls & circle levels. The restaurant was also refurbished to become the 80-seat Holland Restaurant. It became a triple screen cinema from 22nd April 1976. A 4th screen opened in September 1980 and two further screens were added in July 1991.

The Odeon underwent a total refurbishment in July 1998 and although the exterior remains as built, there is nothing remaining to be seen of the once ornate auditorium (there were some details remaining in areas out of public view). In 2008, the seating capacities given in the screens were; 520, 66, 91, 267, 173 and 209. It continued to serve the local community, although there were rumours going around in the summer 2005 to demolish and build a Tesco supermarket on the site. These plans have been the subject of much debate, were still being fought over in 2015, backed by local celebrities and film stars who reside in the area. In July 2015 plans for the redevelopment for a block of flats were approved, and the Odeon closed 11th September 2015, with demolition to follow, keeping just the façade.

By December 2021 the façade had been demolished due to to corrosion of the original steelwork which supported it. Apparently, the Portland stone blocks which from which the façade was made, have been numbered and will be re-instated on the new building. We wait and see if that will happen, but sadly, the entire former Odeon Kensington has now been demolished and the site is an empty plot in January 2022. If a new cinema is built as part of the plans for the site, it will have its own page on Cinema Treasures.

Oh dear, the local council have approved the redevelopment plans, with the cinema likely to close on 11 September 2015 for demolition, and replacement by flats and a basement cinema operated by Picturehouse in 2018..

A further article in tonight’s Evening Standard newspaper commenting on the changing scene for London’s cinemas including this one.

Final closure was due on Monday 31st August, staff told me on a visit on 27th. This was the day a petitions to save the building was handed in at the Dept of Culture, Media and Sport, containing over 25,000 signatures from the 38 Group.

It’s been 3 years since the Odeon Kensington closed and now over 18 months since it was demolished and the site is still an empty lot, with no sign of any construction beginning. The facade stands deteriorating, shored up with scaffold. the facade has now been demolished