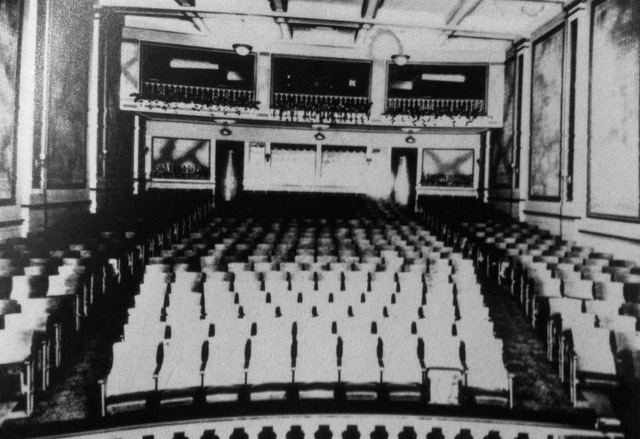 The Majestic Theatre on 1st Street in Benicia was opened around 1920. Today it is today mainly host to comedy acts and occasional other live performances.

The Majestic, run by the Rialto chain, in the late 70’s was called the State. The marquee had State in neon, but no vertical, the letters were removed and the marquee is what it looks like today. It is a nice theatre, with a small balcony. A lot of the fixtures (from what i heard) were removed and installed in the Rialto 4 in Berkeley at the time. I went to a movie there and it was well kept. No idea what it looks like now.

As part of a “Portfolio of Some Recent Architecture in San Francisco and Vicinity”, the September, 1920, issue of the magazine “Western Architect and Engineer” published two photos and a floor plan of the Majestic Theatre, and named the architect as James W. Plachek. Plachek was also the architect of the UC Theatre in Berkeley.

A pair of small photos of the Majestic’s entrance and box office can be seen on this web page. The Majestic was built by former Benicia mayor William Crooks.