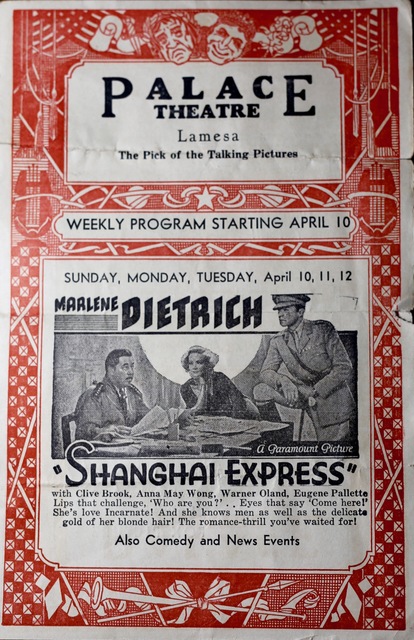 Operating prior to July 1929, the 400-seat Palace Theater was owned by Audrey Cox. It was remodeled in 1949 by local Lamesa based architectural firm Allen & Allen and the seating capacity was increased to 896. It was still open in 1973.

The Palace Theatre, originally seating only 400, was expanded to accommodate 896 seats in 1950 when it was remodeled with a streamlined interior. The August 5 issue of Boxoffice had a brief article with two photos (lower part of left page.)

CinemaTour has a photo.

In the January 10, 1935, issue of The Seminole Sentinel of Seminole, Texas, Dr. J. D. Burleson, dentist, advertised his location as “Palace Theatre Bldg. Lamesa.” The building in the photo has only one floor now, but might have had a second floor with offices that has since been removed.

The Palace was mentioned in the July 6, 1929, issue of Exhibitors Herald-World. RCA Photophone sound equipment had been installed. The house was in operation at least as late as 1973, when it was still advertising in the Lubbock Avalanche-Journal.