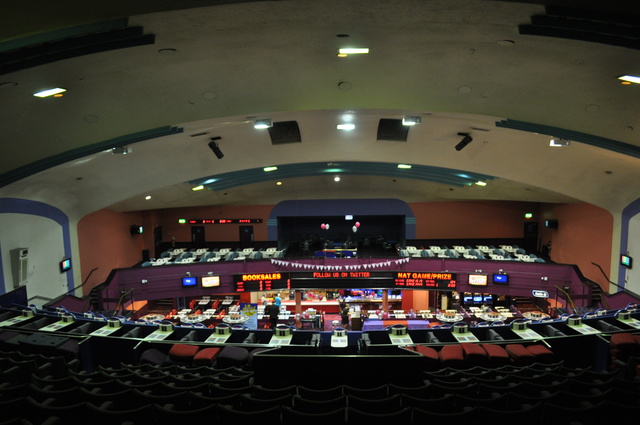 This was the 124th of the original Oscar Deutsch Odeon Theatre’s to be built and it was one of eleven that architect Andrew Mather designed for the circuit.

The Odeon Theatre opened on 27th July 1938 with Max Miller in “Thank Evans”. Although designed in an Art Deco style, here at Hackney Road it was rather plain. The main facade of the building was a straight, flat elevation covered in cream faiance tiles and broken only by a vertical sign just off centre which had the theatre’s name, and an overhanging slab across two-thirds of the top of the building. Inside the auditorium seating was arranged in stalls (1,260) and circle (666). There were two glass light fittings over the circle and decorative ribs across the ceiling and horizontal bands along the side walls, but all in all, it was plain compared to other Odeon Theatres.

It was a fairly early closure, when it screened its last programme: Ian Carmichael in “Double Bunk” and Johnny Biggs in “Wind of Change”, on 20th May 1961.

It was immediately converted into a Top Rank Bingo Club, notable as being the first purpose built Odeon Theatre to cease film use for this use. It continued as a Mecca Bingo Club until it was closed on 16th June 2015, serving 54 years as a bingo club, compared to its 23 years as a cinema. The lease was terminated early by the owners of the building, who stated they have an offer to redevelop the site. The interior of the building was stripped out in February 2018 and the building was demolished in April 2018.

Those of us that used to go here in the 1950s would not describe the interior as plain. We found it to be a very classy joint!

Demolition has begun although the cinema has been totally stripped internally, a very sad sight

Grand opening ad and article posted in the photo section.