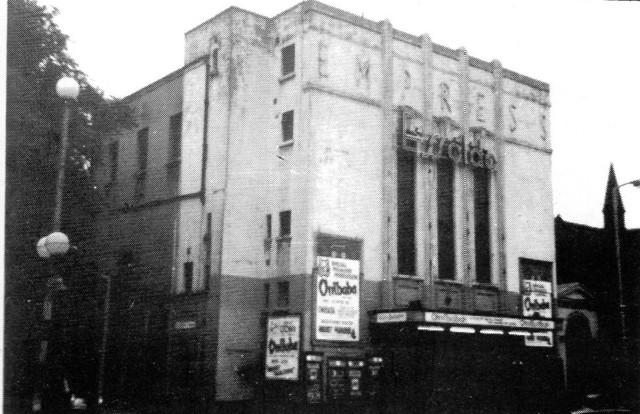 Located in the east London district of Hackney. The building was built in 1777 as St. Thomas’s Square Presbyterian Chapel and it was enlarged in 1824.

In 1912 it was converted into the Empress Electric Theatre which had a Beaux-Arts style and 1,100 seats. A ‘straight’ organ was installed, but it is not known if this was a new installation or the original Chapel organ.

In early-1933 it was taken over by Lou Morris who closed the building to be totally gutted apart from the four walls. Architect George Coles re-designed it into an Art Deco styled cinema, giving it a new modern styled facade and inside the auditorium, seating was in stalls and circle levels with a total capacity of 1,670. A Compton 3Manual/5Ranks organ was installed. It re-opened still bearing the (by then) old fashioned name Empress Electric Theatre on 4th September 1933 with Robert Woolsey and Bert Wheeler in “So This Is Africa” and Constance Bennett in “Our Betters”. By January 1943 it had been re-named Empress Cinema.

It remained an independently operated cinema until 1955 when it was purchased by the Essoldo Circuit and re-named Essoldo Cinema. It closed on 18th November 1967 with John Lennon in “How I Won the War” and Ron Foster in “The Music Box Kid”.

It was converted into a Bingo Hall which was very successful. Latterly operating as a Top Rank Bingo Club it closed in 1993 and the building was demolished in August 1995.

Student housing was built on the site, but the original arched gateway to the former Chapel’s burial ground was retained next to the current new building.

Exterior photo of the Essoldo as a bingo hall here:–