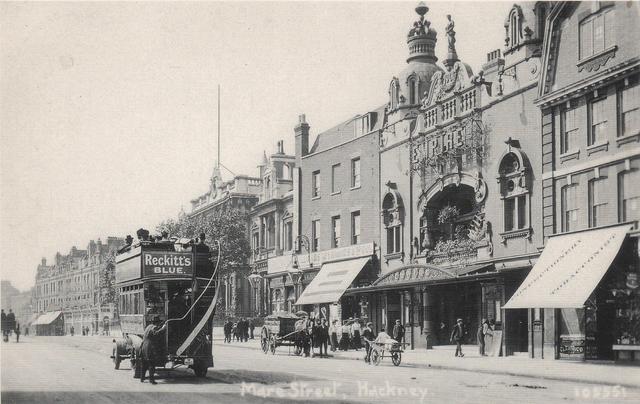 Located in the east London district of Hackney. The Hackney Empire Theatre of Varieties was designed by Frank Matcham and opened on 9th December 1901. It had an original seating capacity of 2,132 and was built for Oswald Stoll. Although almost always used as a live theatre (apart from a period as a Television studio 1956-1963 followed by use as a Mecca Bingo Hall 1963-1986), the Hackney Empire Theatre of Varieties showed films as part of the variety bill from its opening night and through its early years and from at least 1914 it was a cinema on Sunday evenings screening continuous performances. It is notable for the inclusion of a permanent Bioscope projection box as part of the buildings' original design, one of the earliest examples of such a feature and this is located at the rear of the dress circle. A cinema screen is part of the decoration of the safety curtain.

In later years a projection box was installed in the spotlight box in the dome of the ceiling, but this proved to be too steep an angle to give a satisfactory picture on the screen. A new projection box was installed at the rear of the gallery(3rd balcony) which was a little better. From this box, during the 1930’s and into the post-war 1940’s on a ‘Sunday-For One Day Only’ each week, double bill feature films were shown. This made use of the building on a day when live performances were forbidden by law.

It has been extensively restored and reopened in 2004, greatly extended but with its glorious richly decorated auditorium, with three balconies, returned to pristine condition.

In 2019 the Hackney Empire Theatre was a location for several scenes in the film “Judy” when it ‘stood in’ for the London Hippodrome.

The Empire Theatre is a Grade II* Listed building.