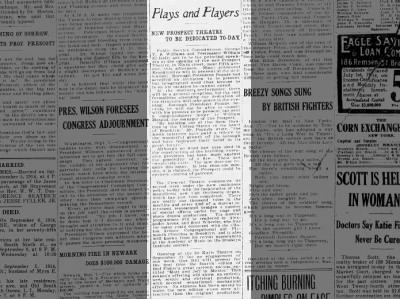 Facts about the Prospect theatre 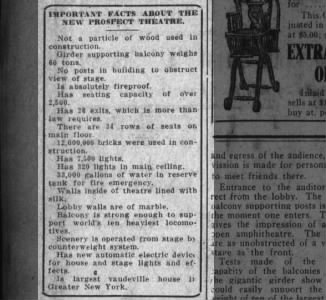 Heartfelt thanks for the pix. I’m 83 and I remember our (Mom and me) going to the Saturday matinees. We’d first go to the dime store (Kresge’s?) across the street and buy a bunch of candy then to the theatre. I also recall one of the serials: Nyoka, Queen of the Jungle. I believe there was a dance studio right next door, second floor, where I took tap lessons for a few years. Does anyone recall the Avon Theatre, a block away from the Prospect? FYI, I attended PS 39 for a couple of my elementary school years. (My family left Brooklyn December 1943 for Cooperstown NY) Recently (6/2011) my daughters and me visited the school. Fortunately there was some kind of fundraiser going and and we were graciously shown through the school. P.S. 39 aka Henry Bristow is a Landmark school! Forgive my rambling. Beatasum

For a place that’s been closed since 1967, it seems to be in pretty good shape. There are a whole bunch of movie theatres that closed much later & do not look as good. As usual great job with the photography Matt, keep up the good work.

Ha, thanks menright! You beat me to it.

I recently visited what remains of the Prospect Theatre. Check out some photos at After the Final Curtain
.

Great bunch of pictures on the current state of the theatre on the After the Final Curtain website. http://afterthefinalcurtain.net/tag/rko-prospect/

According to this interview with Moe Howard, this is where Ted Healey and Moe Howard teamed up—starting what became The Three Stooges. http://www.youtube.com/watch?v=lm6F5-qYONo

The Prospect was another of those great neighborhood movie theatres. My grade school graduation in 1959 was held there. I remember the dinnerware set that my mother treasured. She bought pieces weekly at the Prospect. Movies that I saw there shape my thinking for my entire life. Two notable ones were Two Women with Sophia Loren and I Want To Live with Susan Hayward.

My parents were from nearby Red Hook. I only heard of this theatre and others close to it because of them.

Just left the Avon Theatre site and now another memory jogger. My mother and I often went to the Saturday matinees at the Prospect Theatre, circa 1941-1945. Besides a movie, the clliff-hanger serials (remember Nyoka, Queen of the Jungle"?) and vaudeville shows. The all-midget show totally fascinated me. My Mom and I would buy a bag of candy from the candy counter at the 5 and Dime located diagonally across the street from the theatre. My memory is foggy but I believe there was a dance studio called “Rhetta’s” whose entrance was next to the theatre. I took tap dance lessons there.
Thanks to the creators of these fabulous websites.

The new website for PATOS – the current owners of the WurliTzer organ from the Prospect is: http://theatreorgans.com/patos
Jay Smith

The main page of the website is actually View link

The Wurlitzer organ that was used in the Prospect was removed in 1960 and was put into storage. About 14 years later, it was moved to Pittsburgh, P.A. and rebuilt. It was then installed in the Keystone Oaks High School just outside of Pittsburgh. The Wurlitzer is maintained by the Pittsburgh Area Theater Organ Society (http://mysite.verizon.net/patos.wurlitzer/index_files/Page323.htm).

On Sunday January 28, they appeared at the RKO Prospect at 6:25 PM.

The July 7, 1933 Brooklyn Eagle carried the following notice in its movie ad section:
“All The Beer You Want at the RKO Prospect
Here’s some good news for those theater patrons who are planning to attend next Wednesday’s Gala Community Night Show at the RKO Prospect. Immediately after the show the stage will be cleared to the back wall-the entire space devoted to dancing-and all the beer you desire to drink is yours for the asking.”

To promote his new film “The Ladies Man,” Jerry Lewis appeared on stage at this theater on July 13, 1961.

Warren, I was devastated to see The photo of “Dracula” at the RKO Prospect in 1931 ! My friend is going to PLOTZwhen I show it to him ! Many thanks ! frankie from Brooklyn

We used to call the Avon “The Itch House” for obvious reasons. I believe I paid 45 cents to see “Samson & Delilah” 40 or so years ago. The Prospect was called the RKO Prospect, and in 1967, I was 24 and on leave from the army, when I took my 2 sisters, then 10 & 12, to see a double bill of “Gypsy” and “The Music Man.” I still live on 22nd Street, and miracle of miracles, my other neighborhood theater, the Sanders, reopened a few years ago as the Pavilion on 14th Street and Prospect Park West. Once a single, it is now a ten-plex. But at least I can walk to the movies once again. Frankie, Brooklyn NY

Does any one recall another smaller theater one block away, called the “Avon”, also on 9th street (bet 5th and 4th Avenues ?)? I remember seeing triple features there in the 60’s.

The RKO Prospect Theatre is located at 327 9th Street.