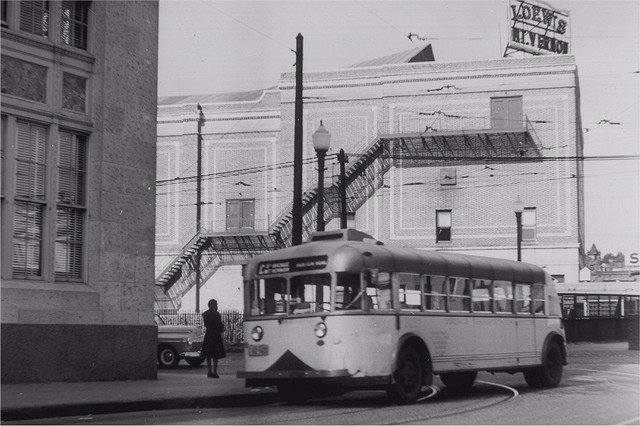 Constructed under the name Gramatan Theatre, it opened as Loew’s Mt. Vernon Theatre on April 11, 1925 with Buster Keaton in “Seven Chances”. One of four large Loew’s theatres in Westchester County. It survived into the 1960’s, when it was demolished to make way for a municipal parking facility.

The photo with the trolley is a view from W. 1st St, which is across the railroad cut that was behind the theatre. The Lowe’s sign in that photo was on the left side of the theatre, facing N. 5th Ave (now aka Sharpe Blvd N). The photo with the marquee is actually the front (and only) entrance to the theatre. (Look closely, you can see the icket booth on the right side of the entrance.) It faced Roosevelt Sq South. Directly across from the theatre is Mount Vernon’s City Hall.

I remember going to a couple of movies there as a very young boy, the most memorable was the local premiere of The Beatles “A Hard Days Night.” Couldn’t hear a thing over the screaming girls! :–)

This was a terrific theater that I frequented as a kid in the 60s. The first movie I ever saw was in this theater: Tom Thumb. I also saw the Beatles in a Hard Day’s Night there the first day the film opened. Also, remember vividly Bye Bye Birdie.

The theater had a huge smoking lounge on the second level. Also, the lobby was enormous with two tall staircases that took you to the balcony.

I saw Jerry Lewis appear there on a theater publicity tour for The Nutty Professor.

I believe the theater closed around 1968, as did the wonderful RKO Proctor’s a block away. The latter’s building remained virtually intact up until very recently. Loews, however, was almost immediately razed for an ugly parking garage which still remains an eyesore right across the street from City Hall.

Mount Vernon lost all it charm when these two wonderful places closed.

This theater was at Park and Elm in Mount Vernon in 1933, but it is unidentified. It doesn’t appear to be one of the three listed to date. Any ideas?
http://tinyurl.com/29gvou

This photo shows the Loew’s Mt. Vernon in the late 1940s.

I knew Loew’s very well in the 1950’s and early 1960"s. In 1952, I saw two black and white horror features in one afternoon: Frankenstein with Boris Karloff and Dracula with Bela Lugosi. When I was in junior high school, the “Bridge over the River Kwai” was playing and my boy scout troop built a replica of the bridge (lashed wood structure) and it was put atop the ticketbox. I still have the picture from the Daily Argus!

This one opened on April 11, 1925. The feature film was “Seven Chances” with Buster Keaton.