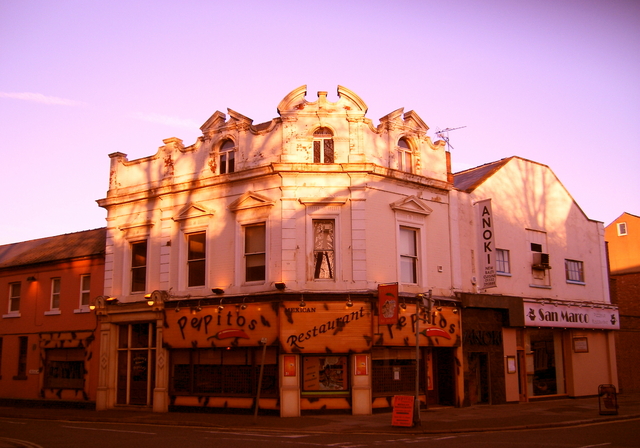 Opened as the London Road Cinema on 18th December 1913 with the Gaumont production “Her Majesty the Little Queen”. It was located on the main London Road between Canal Street and Midland Road (‘close to Derby Midland Road Railway Station’).

The façade was highly decorated in a Baroque style and this was carried onto the adjoining building on the corner of Canal Street. In the centre of the façade was a small balcony that was actually part of the projection suite and served as an emergency exit for the projection staff. In later years you could stand on the pavement outside the cinema and hear the soundtrack of the film and the whirr of the projectors.

The auditorium had seating in stalls and circle levels, the front of the balcony was in a horse-shoe shape. There was a high barrel vaulted ceiling that was decorated with ornate ribs and was supported by rows of female plaster busts, similar to those on the front of old sailing ships.

Within a short while of opening the name was changed to Cosy Picture House and it continued as an independently operated cinema. It was closed for a few weeks for refurbishment and re-opened on 3rd April 1939 as the Forum Cinema. By 1947 it was part of the S. Graham Circuit of Nottingham.

It was taken over a a local circuit Portland Provincial Cinemas from January 9, 1950 and the name changed to Cameo Cinema. They began a policy of screening art house and foreign films (usually French), the first being Serge Reggiani & Anouk Aimee in “Les Amants de Verone”, and this lasted for a while until it reverted back to being a second and even third run cinema. It closed on 26th September 1959 with Fred MacMurray in “The Day of the Badman”.

After laying unused for a couple of years it was purchased by Blundells Ltd. and became a furniture store. The decorative features were removed from the façade, which left a plain exterior and a shop window was inserted where the entrance was originally. Inside the auditorium the circle was extended forward to the whole length of the building creating a new second floor. Luckily, the ceiling and plaster mouldings were left intact and can still be seen today.

Blundell’s moved out the premises after many years and the building was converted first into a retail shop on the ground floor selling Aquatic goods, while upstairs became an Italian restaurant called La Scala. Eventually the shop at ground floor closed and the restaurant took over that space as extra accommodation and room for a cabaret space. It became the San Marco restaurant and is now known as Anoki.

A photograph of the closed down Cameo Cinema that I took in 1961 when Blundell’s Ltd announced they had purchased the building. A few weeks later all the decorative features were removed from the facade.
View link

Two views that I took in October 2003. Note the now plain facade, and the original style on the building to the left which was built at the same time as the Cameo Cinema.
View link

3 grand opening ads posted. It appeared to open as the Cosy Picture Picture house on December 18th, 1913. It reopened as the Cameo Cinema with “Les Amants de Verone” on January 9th, 1950.