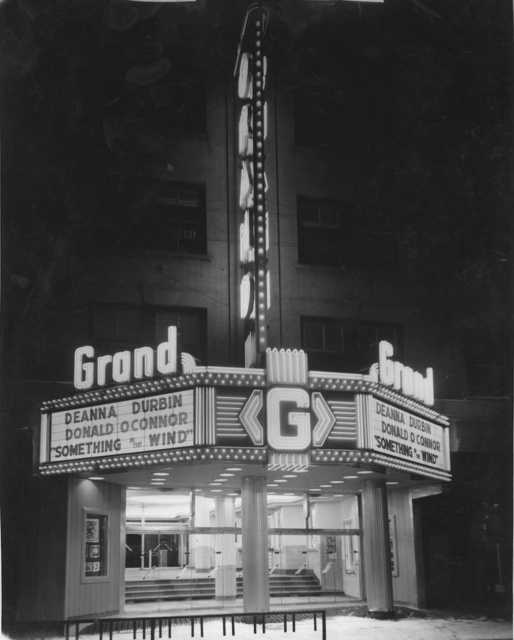 Opened on February 5, 1912, the Sherman Grand Theatre was designed by Calgary architect L.R. Wardrop. With 1,500 seats. It opened with a production of “Passing of the Third Floor Back” starring British actor Johnston Forbes-Robertson. At the time, the Grand Theatre was the largest theatre in the Canadian west. Operated first as an opera, concert and stage house, then as part of the Orpheum vaudeville circuit until 1925, it became part of the Famous Players circuit in 1926.

A decade later, it was leased to J.D. Barron’s Trans-Canada Theatre Company. By then it was primarily a movie house, though it still occasionally presented vaudeville, stage plays, and concerts.

Renovations were made in 1936, 1947, and in 1965, during the course of which most of the theatre’s original decoration was either removed or encased. In 1969, The Grand Theatre was sold to Odeon Theatres, which twinned the auditorium in 1972. Another major renovation took place in 1985, after which the theatre was reopened by Cineplex Odeon as the Showcase Grand 2 on December 20, 1985. Now with two redesigned auditoriums, both equipped for 70mm projection, the combined seating capacity was 1,200.

The Grand Theatre has now been sold to Theatre Junction, which is extensively remodeling the venerable house once again, this time as a flexible venue for theatre, dance, music and film. The first phase of the project, with a ground-floor restaurant and a second floor theatre, opened early in 2006.

University of Calgary Press has published a book about the city’s history from 1912 to 2005, in which the Lougheed Building and the Grand Theatre are prominently featured: Calgary’s Grand Story. (The page displays a very small picture of the interior of The Grand, as featured on the book’s cover.)

It’s great to hear that they are redoing this theatre. I was only in it a few times during the late ‘80 and early '90s, but I have relatives who told me how “grand” the Grand was when they were kids in the 1940s.

This was not a restoration but rather the creation of a black box type studio theatre space within the physical space that once was occupied by the Grand’s ornate interior. Elements of plaster work found in the original lobby area have been preserved, all that is original from the original auditorium are the brick walls/exterior.

I guess it saved them the cost of building a new structure.. but it certainly was not a “restoration” by any means. The Grand Theatre (1902) in Kingston Ontario is in the middle of doing the same thing.

The link to the University of Calgary’s page about Donald B. Smith’s book in my first comment above is dead, but perhaps the Google Books preview of Calgary’s Grand Story will last longer.

Theatre Junction has been operating in this building for four years now. A few bits of the original plaster surviving in what appears to be the original theater entrance hall can be seen in this video from the Calgary Herald, dated July 26, 2009. I don’t know if this part of the building has been restored since then.

opening ad as a twin from September 15th, 1972 can be found in the photo section.

This venue is no longer showing films as it’s a live theatre venue now. It’s not correct to mark it closed but it’s no longer a cinema.

and reopened as Showcase Grand on December 20th, 1985.