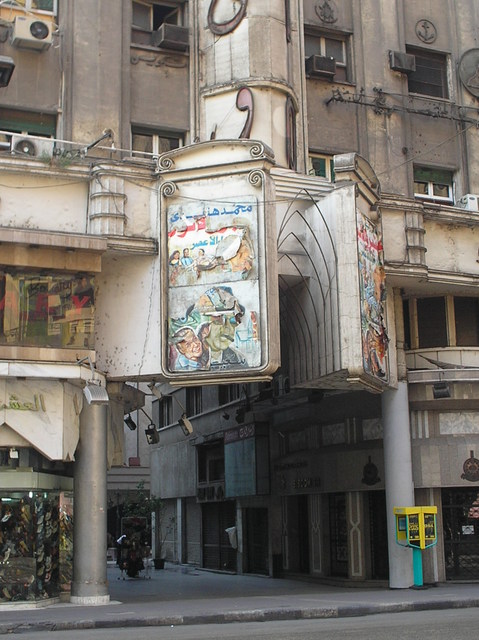 In Egypt, this theatre’s name is pronounced, RAH-dee-oh.

Located just off the Talatt Harb on Haret Al Bosti and Al Nabrawi, the Radio Cinema was opened in 1948. This impressive cinema features a large office block above the entrance and retail spaces on either side. One passes beneath a towering original neon-ornamented vertical sign tower and marquee which appears to be partly original and partly a fairly recent Post-Modern Neo-Classical redo. Next, the visitor passes down a long breezeway lined with shops, and is confronted by the auditorium proper, the entrance to which is surmounted by another marquee reader board, likewise given a recent facelift.

In spite of the attempts to slightly update the theatre’s image, this cinematic palace was closed in the mid-2000’s, but has since re-opened. Its appearance at night must have been truly impressive, as there is much neon tubing, not just on sign and marquee, but outlining many of the ornamental features of the facade, including medallions of anchors, and a small representation of a famous Art Deco style monumental statue which graces a busy intersection not far away. This monumental statue of a classical goddess with her hand resting protectively across the shoulders of a Pharaonic sphinx is a much-reproduced symbol of the Egypt of Today and the Future protecting her Past–and here it is again, reproduced in neon, on the facade of the Radio Cinema.

A photo and text on the Radio Cinema here:
http://www.hsje.org/cinema/cinema_radio.htm

I visited Cairo during Thanksgiving 1998 and came across this theater when we were sight seeing in the streets. The left marquee displayed the American film, TURBULENCE, with Arabic subtitles.

Here is another photo:
http://tinyurl.com/29h8tz