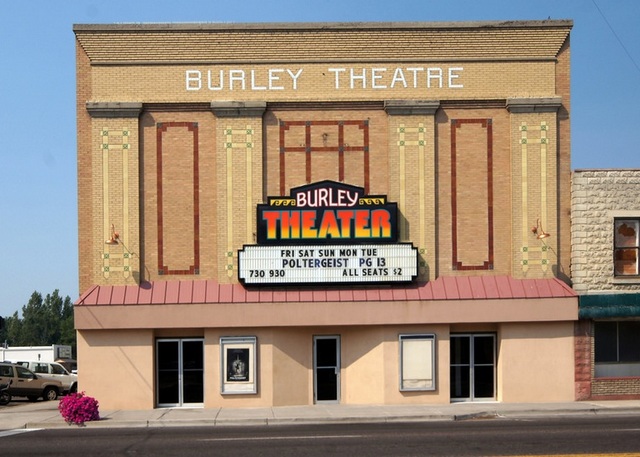 This wonderful single screen theatre, located in downtown Burley, was originally a vaudeville house & movie house which opened on October 20, 1914.

Amazingly, it has survived quite well. The original stage is completely intact, including barely used scenery flats that are still hanging from the rafters. The theatre’s original lighting dimmer panel is also still intact and functioning. The theatre’s façade, which was restored in 1991, is mostly original as well.

In 2001, rocking chair seats from nearby Century Cinemas 5 were installed in the theatre’s auditorium. The projection booth, only accessible by ladder, supports mono sound and runs with a Motiograph AA projector.

The Burley Theater is still operated by the Harris family.

Here’s a 2008 view of the BURLEY: http://www.boxsetgallery.com/stein/index.html

Here is the biography of Stanley J. Osika from volume 4 of “History of Idaho: Gem of the Mountains” by James H. Hawley, which was published in 1920:

“Stanley J. Osika is the proprietor and manager of the Burley Theatre and is numbered among the most alert and energetic young business men of the town of Burley. The width of the continent separates him from his birthplace, for he is a native son of Brooklyn, New York. He was born February 8, 1886, his parents, Peter and Plagnar Osika. The first twelve years of his life were spent in his native city and he then accompanied his parents on their removal westward, their destination being Park City, Utah. He there attended school and also continued his studies in Salt Lake. He took up the study of music under Antone Peterson, specializing in harmony and the trombone, and he has figured prominently in musical circles at Salt Air resorts and in the Liberty and American theatres organized and maintained at various places throughout the country. In October, 1914, he came to Burley, Idaho, where he established a moving picture house where the Blue Bird is now located. In December, 1917, he removed to the Burley Theatre, securing larger and more commodious and modern quarters. He today has one of the finest moving picture houses of Idaho and maintains a six-piece orchestra. He presents the finest attractions of the film world and has a liberal patronage, the business having long since reached profitable proportions.”

It’s not clear if Osika owned the theater building itself or only leased it, but as the book refers to him as the proprietor of the theater he must have owned the business. Stanley J. Osika was listed as a resident of Cassia County, Idaho, in the 1920 U.S. census, but the 1930 census lists him as a resident of Erie, New York.

The Burley Theatre is operated by the same owners of the Century Stadium 5. website The Burley is at the bottom of the site. It is a discount second run house.