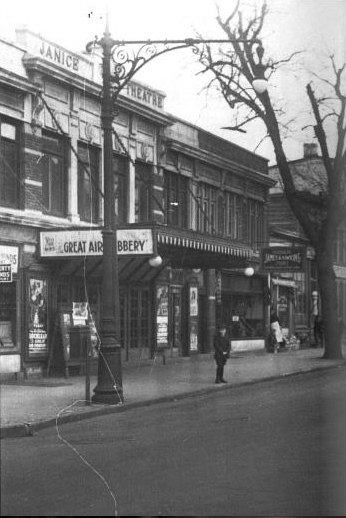 The Janice Theatre was reportedly the first theatre built in Flushing, and occupied the ground site of an old mansion known as Fountain House. It opened on November 24, 1914, and closed early in the sound era. Around 1925, the Janice was “modernized”, with the installation of a new screen, projection equipment, marquee, and a $15,000 Wurlitzer organ. The latter was played by Charles Rogers, who’d previously been organist at the Strand Theatre in NYC.

More information about the Janice Theatre’s history, including a contemporary address of the site, is needed. I believe that it was on the east side of Main Street, one block or possibly two south of Northern Boulevard.

Hi,
The Janice Theater stood where “Goulds Records” was on the eastside of Main St. very near the corner of Nthrn Blvd. If you have a photo or scan of the eastside of Main St. looking Nth and that shows Gould’s Records, look at the tops of the bldgs, they are the same as the ones in the Janice Theater photo. Interesting stuff. I recently acquired two tickets to the theater on Ebay.

The Janice can be seen in this photograph:
http://tinyurl.com/ykkwnmo

Can’t fix the google map location, since we don’t have an address, but I was able to correct the street view to an approximate location just south of Northern Blvd on the east side of Main Street. This is based on Warren’s comment from 2005 that the former theater site is now part of the storefronts at the base of the modern office building that occupies that corner. This also reconciles with the vintage photo linked by kencmcintyre, which claims to have been taken from the Northern Blvd (then known as Broadway) looking south along Main Street.