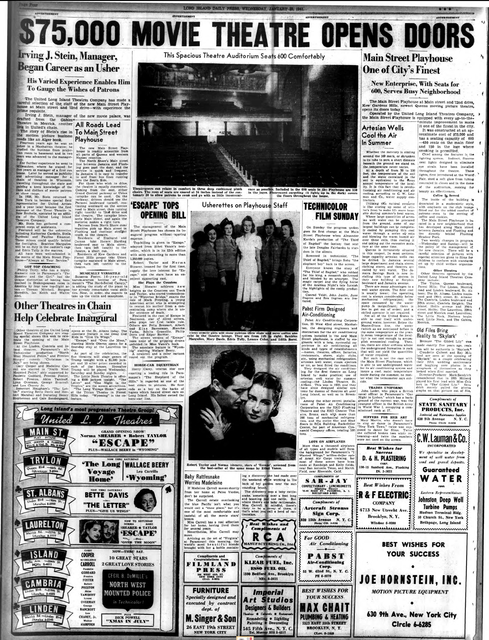 Opened by United L.I. Theatres in 1941 with Norma Shearer in “Escape” & Wallace Beery in “Wyoming”. It had 600-seats. By 1948 it had become a first run Interboro Circuit Inc. house. It was taken over by an independent in the late-1970’s. For many years it had a popular $1 double bill policy. When other first run theatres in the same zone closed, like the Parsons Theatre and Prospect Theatre, it adapted a new first run policy.

Since 2006, I am founder & Chair of Rego-Forest Preservation Council, which advocates for potential Individual Landmarks & Historic Districts in Rego Park and Forest Hills. Forest Hills only has 2 official landmarks since the Landmark Preservation Commission’s founding, and Rego Park has none. Both areas do have potential in terms of landmarking, fundraisers for restoration & adaptive reuse, etc. We occasionally expand our advocacy work beyond our immediate area. Our group operates on a voluntary basis & pure passion… no membership fees at this time.

I am primarily interested in greater architectural examples which could become endangered in years to come: Midway Theater, Forest Hills Theater (even though it’s a Duane Reade/Staples since ‘99 with a restored facade), Drake Theater in Rego Park (now a catering hall, but may be sold to developers), the distinctive Art Moderne facade of the '39 Trylon Theater (mosaic & terrazzo floor is sadly concealed since 2005, but can’t be let out of our scope), the Fair Theatre in Jackson Heights, Ridgewood Theater (the oldest extant theater in operation in Queens), the great Terra Cotta facade of the former Bellerose Theater (now a Karate studio minus its marquee), as well as some others.

How long have you lived in Forest Hills?

Thanks for sharing your information and insight. I find these theaters vital and fascinating as well, particularly the Fair & the Ridgewood. I was wondering what your views on the Cinemart on Metropolitan Ave. are.
I’ve only lived in Forest Hills for 2 years now, but I grew up in Middle Village and lived there for many years.

You’re welcome! Several generations of my family came from Forest Hills. What were some of your favorite theaters in Middle Village? As a Forest Hills resident, do you go to the Main St Cinemas? I do occasionally, and wish it would be restored properly, as well as maintained. The occasional graffiti on the aluminum-siding facade is an eyesore!

The following is a Daily News article on the Cinemart from March 2006: View link I have been corresponding with the owner in regard to possible restoration plans for the interior (as a start), but nothing materialized due to the owner’s lack of time. In spring 2006, he added Bay Ridge’s Alpine Theater to his holdings, to prevent it from becoming a chain store. I am proud that the Cinemart has been in existence since the 1920s, since neighborhood theaters rank high amongst the “ultimate public institutions.”

I also take pride that the owner is passionate about keeping neighborhood theaters open, but some theatergoers (including myself) weren’t so enthusiastic that the facade’s bricks, brick patterns, and terra cotta which adorned the central window, were concealed with stucco in 2002-2003. That was prior to my involvement in preservation. If I knew, I would have tried to convince the owner to apply for funding to restore the facade in an historically appropriate context. I am still hoping he will have some time to work with me, and remove the generic ceiling panels that conceal the ornate coffered ceiling in the inner lobby, and repaint the coffered ceiling in the outer lobby in its original colors. Grants may be available through one of the NY Landmarks Conservancy’s funding programs, National Register of Historic Places if the State Historic Preservation Office deems the property eligible for placement, or through my own fundraiser. I understand his time constraints though.

Whenever I think of the Cinemart, the long summer walks to the theater with my mother, or both my parents, and a friend, come to mind. After the screening, we would treat ourselves to homemade ice cream in Eddie’s Sweet Shop around the corner, and its distinctive early 20th century ambiance would add to the spirit of an afternoon/evening well-spent!

Thank you, NativeForestHiller, for the Daily News article, more information and your efforts with the Preservation Council.

Overall, I’m happy with the renovated Cinemart, and also have positive memories of going there when I was younger. When I was little,I remember my friends & I taking a bus down Metropolitan Ave. from Middle Village to Forest Hills around 1979 to see Breaking Away, when the Cinemart was a twin. I would imagine we stopped into Eddie’s as well. I also remember going there in the early 90s to see a midnight show of the bizarre Mike & Spike animation festival, which included some pornographic cartoons. Even when the Cinemart was a second-run house, I remember it being infinitely cleaner than the Arion or any of the other older neighborhood independents. I went to the Arion often, I believe I have a post regarding the Arion on its page.

To answer your question, I donâ€™t go out to the cinema very much anymore, being that I have a high-definition TV hooked up with Dolby 5.1 Surround Sound & a Netflix subscription. But Iâ€™ve been to the Kew Gardens a few times, and I did enjoy seeing No Country For Old Men recently at the Cinemart. I havenâ€™t been to Main St Cinemas at all.

I took a better photo of the Main St Cinemasâ€¦if you go to the Photobucket album, youâ€™ll see some recent shots of the Fair as well.

I grew up in the neighborhood where this theater is and remember when it used to be a single-screen theater with a balcony. I can’t believe its been sixplexed without having been expanded. The balcony theaters must be tiny.

Paktype: You betcha, I only go there in the afternoon ,never in the evening.

Fred1: I saw a lot of movies here when I was a kid in the 1970’s. They used to run old Disney films here in the summer. I saw “Herbie Goes to Monte Carlo” here as well as “Follow Me, Boys!”, “Gus”, “The Apple Dumpling Gang” and so on. I think I also saw “The Blues Brothers” here about five times in 1980. Haven’t been there in at least 20 years now but whenever I’m on Main Street, it seems very busy.

They recently upgrade to digital . Their concessions is cheaper than the major chains. .Besuure to get there early .