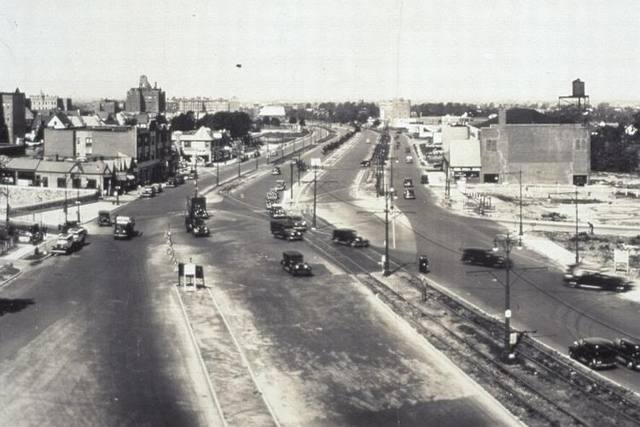 The Kew Gardens was built by the Small-Strausberg Circuit (S & S Circuit), which was taken over by William Fox while the 1,287-seat theatre was still under construction. As the Fox Kew Gardens, it had its grand opening on September 14, 1929, with the Fox Movietone feature, “Lucky Star”, plus assorted “all-talking” short subjects. Programs changed three times a week and were subsequent run to the well-established Fox Forest Hills, which was about a half-mile west of the Kew Gardens and its nearest competition.

The Kew Gardens Theatre was the first theatre ever built on the north side of Queens Boulevard, and was a block away from its intersection with Union Turnpike. Unfortunately, the neighborhood was still developing and under-populated, so the Kew Gardens was virtually dead-on-arrival when Wall Street crashed only a month later. In December, Fox closed the theatre and decided to convert it to miniature golf, which was all the rage at the time. All the seats were removed, with the ground floor used for an 18-hole “Tom Thumb” golf course. The former balcony was divided into a spectator section and an area for ping pong and billiard tables. As the Kew Gardens Indoor Golf Course, it re-opened on August 18, 1930. For 50 cents, patrons could play one full round, with equipment and instructors provided by the management. Tickets for unlimited play were $2 weekly or $6 for a month.

The deepening financial crisis seemed to keep players away, so Fox soon closed the premises. The circuit was going through a bankruptcy crisis of its own. The Kew Gardens Theatre remained padlocked until being assigned to the Skouras Theaters Corp. circuit, which was formed to run all the former Fox theatres in Queens.

Skouras, however, had no interest in re-converting the Kew Gardens Theatre into a theatre, so it just sat there vacant until the late-1950’s, when it was finally sold for demolition and replacement by an office building.

Having lived in neighboring Forest Hills all my life I never knew of this theate. Thanks for an intersting discovery.

Fantastic! I live on the block next to this site. I knew there had been golf courses around there but never a movie theater. It is technically the last block in Forest Hills but i guess they didn’t want to have two theaters named “Forest Hills” so they chose Kew Gardens.

My apartment complex was built in 1939 and i have seen photos of the area at this time. I would love to dig up some pics of this.

Warren, belated thanks for your postings on this theater. I lived in Forest Hills for many years. As a kid, I always wondered about that building… my dad, Corona born-and-bred, had told me it had never opened. I guess the stock market crash erased memories of its short life!

I found a 1932 exterior picture of the already-derelict theater on Queenspix.com, FOR 118.

Not sure if this is the same photo Warren posted in 2006, but here’s a 1936 photo of Queens Boulevard at Union Turnpike/Interboro Parkway, with the Fox Kew Gardens on the right.

Thanks to mp775 and to Warren for the fabulous photos. Having lived in Kew Gardens for many years before moving to Manhattan, I still have great fondness for this neighborhood. It is astounding for me to see the area so undeveloped! It makes you think “What were they thinking” when they built this theater in the middle of nowhere. But I guess the answer is that everyone expected the good times of the roaring 20’s were going to go on forever and that the area would quickly develop.

Here is a shot of the theater from the other side of the Boulevard circa 1935. Warren made the ID of the building from NYPL collection image which I located.

Union Turnpike was my home station for many, many years. I had no idea the “Pickman Building” and the adjacent stores were once the site of a movie theater. The above photo is quite shocking to anyone who knows how crazy that intersection is today. The Jackie Robinson Parkway runs directly beneath the intersection now.

Always the possibility of a post office reassignment. Case in point, the Bellerose used to be in Bellerose before the small Nassau County strip in which it was located was reassigned to Floral Park. As far as the ribbon is concerned Ken explained sometime back that the ribbon was established when the theatre was added to CT and cannot be changed.