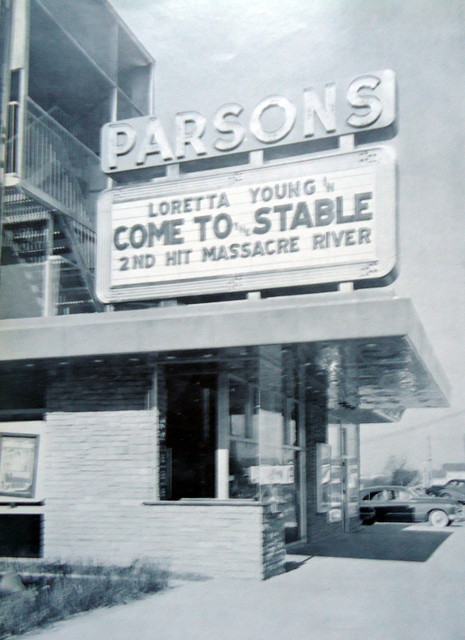 Opening on October 26, 1949 with James Cagney in “White Heat” & Alexis Smith in “One Last Stand”. The Parsons Theatre stood on Parsons Boulevard in the Flushing section of Queens. It was an Interboro Chain theatre.

When Loews bought the chain, they acquired it and eventually twinned the theatre. The old Parsons Theatre closed in the late-1980’s as a quad, and was razed to make way for townhouses which now stand on the site.

The Meadows in Fresh Meadows also had an AX exchange.

AXminster must have been Brooklyn, then.

A photo of the foyer of the Parsons Theatre can be seen at the top of this page of the January 7, 1950, issue of Boxoffice.

Thank you Joe for the photo link and to everyone adding their memories to the glories of this old movie house. The photo of the upstairs lounge reminds me of all the times I did my homework there while I was an usher (there was alot of downtime while the movie was running).

One more memory… When I was a very young child I remember them having matrons for the Saturday afternoon shows. Scary old ladies with flashlights!!!! The manager was Mr. Resnick, he used to call me Victor instead of Vincent. The stuff you remember…

Just to clear up some confusion about “Flushing”. The name “Flushing” was used for many years for several different communities in Queens that bordered the famous “Flushing” community anchored by Northern Boulevard, northern Main Street and Roosevelt Avenue. Kew Gardens Hills always had its own zip code (11367) but its Post Office was always referred to as “Station C – Flushing, New York”. When I was a kid, we always used Flushing in our address even though we lived in KGH. In recent years, Queens communities have stopped using the Flushing name. Station C was renamed “Kew Gardens Hills” a few years back.

This closed as a Quad

Shame there are pictures of they interior