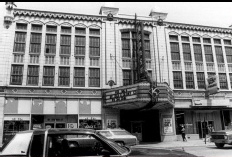 The Kearse Theatre opened in November 29, 1922 on Summers Street between Fife Street and Quarrier Street. The Kearse Theatre was closed in December 1979. Listed to the National Register of Historic Places in 1980, the theatre was nonetheless demolished in 1982.

Does anyone have any good photos of the Kearse?

Does anyone else have any photos or info on the Kearse thester?

Awesome! Thanks for the info!

The theater for which construction contracts had just been let, according to an item in the January 14, 1922, issue of The American Contractor, must have been the Kearse:

Is this theater still around? I am in the process of buying and rehabbing the Philippi Grand and if it proves profitable I want to work on reopening other theaters in WV, KY, OH, PA, MD, and VA. There are so many wonderful old theaters with more character than any modern cookie cutter places.

The official NRHP listings from the State of West Virginia Division of Culture & History website (http://www.wvculture.org/shpo/nr/kanawha.html) state that this theater was demolished in 1982.

November 29, 1922 grand opening with the great “Blood and Sand” ad posted in photos.

I have one of the original Kearse Theater Movie Marquis. I am willing to sell if anyone is interested. It has the original shipping label in the back.