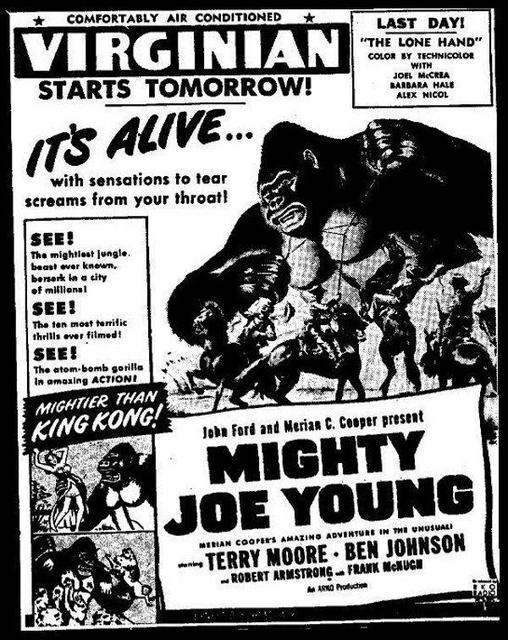 The Virginian Theatre opened October 19, 1912 as a silent movie house and a vaudeville theatre. The new ‘Playhouse’ cost $20,000 to complete and seated 700. Four new films were shown on the opening day, and drew large audiences.

Extensive remodeling in 1922, led to a new opening on November 20, 1922. Theatregoers, for 30 cents, could see the Charleston Premiere of “Smilin' Through” starring Norma Talmadge. This remodeling added seats to the theatre which now had a capacity for 954, with 603 on the orchestra floor and 351 balcony seats. Dressing rooms were back stage, behind the screen. There was an orchestra pit, and a Moller Theater Organ to the right of the orchestra. The organ was opened by Miss Helen M. Derby, who said she composed her own score for each new movie.

The front of the Virginian Theatre had an ornate terra cotta facade, while inside the theatre were marble stairs, elaborate plasterwork and chandeliers.

The Virginian Theatre became part of the Universal Pictures chain in 1926, and from June 30, 1930 it was part of the Warner Bros. Circuit Management Corp. playing first run movies. In 1951, it became part of the Stanley-Warner Theatres chain until 1963, when it was sold to RKO. In 1971, RKO sold it to Cinemette Corporation of Pittsburg. They ‘modernised’ the theatre by draping the walls, and used black spray paint to cover the original hand painted ceiling.

In 1983, Cinemette sold the Virginian Theatre to Charleston property developer Frank Veltri for $145,000. The Virginan Theatre was closed on September 6, 1983 with Roger Moore in “Octopussy”. There was talk of converting it into a music hall, a dinner theatre, or a cinema screening classic movies, but none of these plans got off the ground. In September 1989, permission was received from the Charleston Urban Renewal Authority to demolish the Virginian Theatre and put in a parking lot. The theatre was scheduled to be demolished in April of 1990. There was an attempt to raise money to save the facade, but it was unsuccessful. By 1991, the site was a black topped parking lot, which remains today.

Here is a 1949 ad from the Charleston Daily Mail:
http://tinyurl.com/2bvkty

I seem to recall an incident involving a tractor trailer smashing into the marquee of the Virginian after cutting a turn too sharp. This was a beautiful theater with a large balcony. The Virginian played “The Absent Minded Professor” day and date with the Rialto as the crowds for the film were huge. I saw the film at the Virginian as the Rialto was sold out for all performances the day we attended.

The Virginian was one of the nicer theaters in Charleston. Nice long marquee stretched the entire front of the theater. As a kid, I remember seeing the silent version of “The Greatest Story Ever Told"
every Easter and The original "The Thing.” (Both movies scared the s*#t out of me but for differnt reasons.) Also the premier of DeMille’s “The Ten Commandments” OH. Moses, Moses, Moses!
Good times.

Shame this is just a parking lot, now. Such a beautiful theater. I think I remember it some from my childhood, but I can’t remember if I watched any movies here.

My Grandmother, Louise Smith and Great Grandmother Narcissus Thomas owned the Mary Ann Candy Shop at same address as the Virginian Theatre, Charleston, WV, circa 1942-1943, 705 Lee Street. At that time, I don’t believe the theaters sold refreshments, so theater goers would buy from her candy shop. I have not been able to find anything on the internet about Mary Ann Candy Shop, but do have a picture of the front of it which shows the address.