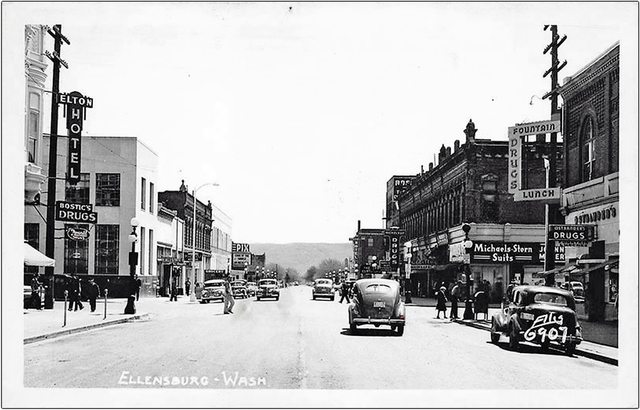 Known for years as the Pix Theatre, and famous for its distinctive sign/marquee on its main corner, this house was derelict for some years in the 1960’s, along with its mate, the Audion Theatre next door. In the 1970’s it was reborn as the Village Theatre, which specialized in pictures rated M, R and X, while the Liberty Theatre, a few blocks away, carried on with family fare. Ellensburg being a college town, the Village Theatre did well for about ten years.

After a second dark period, it reopened as the Grand Central Theatre in the 1990’s. Sometime later it was clumsily subdivided into three screens. In 2005 it was again closed, because the owner opened a brand new multiplex across town.

The Pix Theatre building, which essentially dates from the 1890’s (built after Ellensburg’s disastrous fire in 1889) has a vaguely Moderne frontage, c. 1930s-40s, upgraded, no doubt, to keep up with the more flashy Liberty’s competition. The modest restrooms have similar fittings and tilework as the Liberty Theatre. The auditorium is/was always pretty austere, with only a few Moderne moldings, grilles, etc. The feeling was one of a studio preview theatre. The original seating was torn out with the Village Theatre renovation, and went to a cattle auction arena. In the 1990’s the exterior was finally painted in attractive tones which compliment the minimal Moderne aspects. Commercial spaces were also expanded and enhanced. The Grand Central Theatre was closed in 2005 and became a cafe & church. By 2017 it had become a bank.

The June 7, 1941, issue of Boxoffice mentioned the recent opening of the Pix. It was operated by Fred Mercy, who owned a number of northwest houses, including the Liberty in Ellensburg.

In 1946 both theaters were sold to Clarence Farrell, operator of the Audion and Mid-State theaters at Ellensburg. The July 20, 1946, issue of Boxoffice reported that Farrell would dismantle the Mid-State Theatre and that the Audion would become a stand-by house.

The house was sub=divided in the 1990s, with little success.

It is now a coffee house/church. ‘Free movies’ are occasionally shown.

After serving as a venue for infrequent music events, the Pix-Village-Grand Central is now a branch of Umpqua Bank.