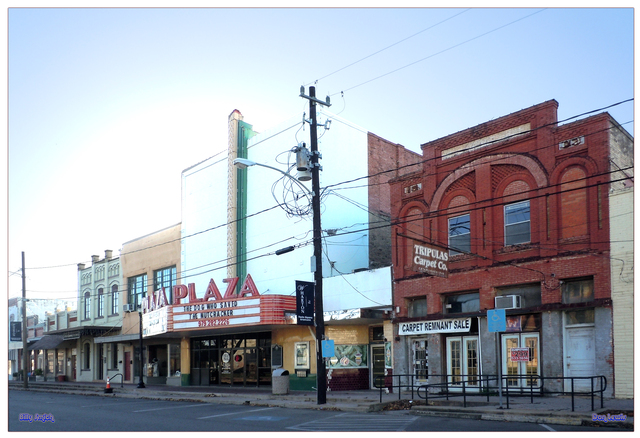 The Plaza Theatre operated as a movie theatre from March 1942. It was converted into a triple screen movie theatre on June 26, 1974, and operated until its closing in June 1985.

The Plaza Theatre was de-tripled and reopened in 1995 as a live entertainment theatre. More history can be found on their website.

Here are some pictures I took on 2/16/07, as the Lamplighters were putting on their final performance of hometown boy Horton Foote’s screenplay to “To Kill a Mockingbird”:

The Plaza opened at 7:15 p.m. on March 19, 1942. The premier feature was “The Vanishing Virginian” with Frank Morgan and Kathryn Grayson. The Plaza was operated by Long Theatres, and Ernest Shultz of Rosenberg, Texas was the Plaza’s architect.

The architect’s correct name was Ernest L. Shult. The Plaza was listed as a 1941 project in a list of Shult’s theater designs published in the 1950 edition of Theatre Catalog.

The official web site for the Plaza Theatre has moved to this URL.

I was the general manager of the Plaza theatre from summer of 1972 until June 1975. I also managed the Rio theatre at the same time. While manager, the Plaza underwent a major conversion from a single screen to a triple screen unit. At this time the theatre was owned and operated by Frels Theatres. Please see my post at the Rio site.

I saw the first Police Academy movie at this theatre when I was about 12 years old. This was in the summer of 1984 about a year before it closed.

I found the opening day ad for the triplexed Plaza Theatre. The grand opening day was actually a year later – June 26, 1974. The three premier features were “American Graffiti” (Plaza I), “Sugar Hill” with Marki Bey (Plaza II), and “The Way We Were” with Robert Redford and Barbra Streisand (Plaza III).