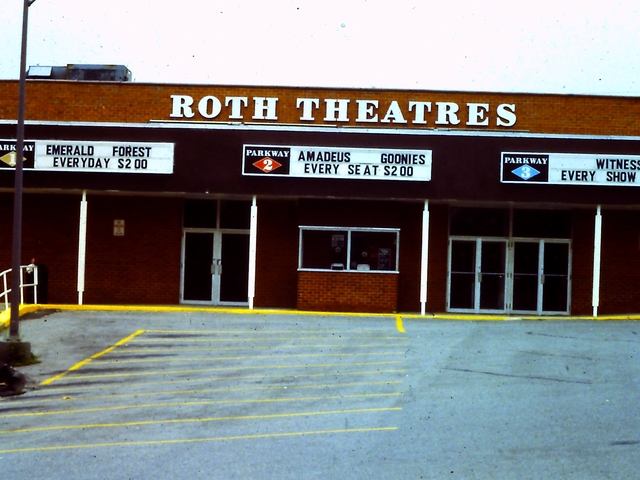 Located in the Randolph Hills Shopping Center. It opened December 25, 1969 and in 1970 this was advertised as Washington’s first triple theatre. It was closed around 1992.

Saw over a dozen flicks at the Parkway throughout my childhood, starting with “Paint Your Wagon” in 1970 and finishing with “Remo Williams: The Adventure Begins” in 1985. When it shifted to bargain movies in the early eighties, I remember the projection bulb was so wretchedly dim it could really hurt the movie. I kind of wish I could go back there tomorrow and see “The Towering Inferno” again.

From my recollection, the theater closed in 1991 or 1992. After that it changed hands with a series of retailer occupying the space in succession. As of August 2014, it is now a Goodwill Retail Store.

I worked there the summer of 1970 as an usher. I made $1.60 an hr and 2 movie tix each payday. It had 2 regular sized theaters (on the right entrance) and very small screened theater (left entrance). Some people would be very upset at the size of the screen when they entered theater #1 and leave. Did not have freshly popped popcorn (heated up). Fun summer job.

Btw the location listed is correct. When Butch Cassidy opened there the line was around the building on weekends. As ushers we would literally stand in the back of the theater during the whole feature. I learned to read a book with a flashlight.

December 25th, 1969 grand opening ad in photo section. It was the first triple cinema in the area.

This was the first movie theater my parents took me and my sister to. It was 1987, I was five years old, my sister was six, and the movie was Disney’s animated “Cinderella.” Actually, that might have been the only time we ever went to this theater. I used to live on Boiling Brook Parkway, within easy walking distance to this theater, but it closed before I was old enough to go to a movie by myself. I can’t remember the exact date it closed, though, I want to say sometime in the late 1980’s, early 1990’s. But it’s interesting to see the place with the movie theater signs again.

I happen to drive by the old Roth’s just a few weeks ago and it certainly brings back memories. It’s quite interesting to see the original building intact.

I grew up around and frequently saw movies at Roth’s Parkway throughout my teens. After I left for college in 1988, the theater, as well as the a few of the places at the shopping center, were a few venues to hangout and catch up with friends during the summers. Compared to other theaters at the time, even in the late 80s and early 90s, the theater felt pretty dated but given that is was a five minute walk from my parent’s house, I couldn’t complain.

To my recollection, the theater closed sometime in 1992, the same year I graduated from college – I just remember walking to the theater one day only to find it was no longer operating. I didn’t frequent the shopping center too often afterwards (since my parents moved out of the neighborhood) but from seldom visits in the following years I recall the building sat vacant before a discount store took over the space in the mid-to-late 1990s.