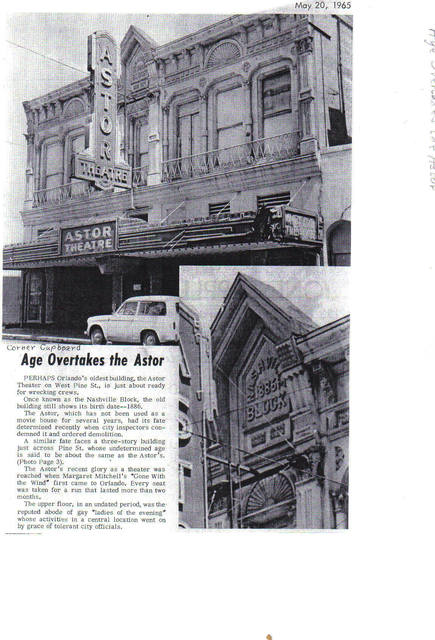 Built in 1886, the Grand Theatre opened in the 1920’s and featured a Moeller pipe organ. Walter Kimble, a retired local musician, was once the organist there. During the 1940’s and into the 1950’s, the theatre was a first run house, usually playing second tier pictures. It had a single floor and an exterior featuring much ceramic tile. The stage and screen were outfitted with curtains.

On September 25, 1953 its name was changed to the Astor Theatre, reopening with Fred Astaire in “The Band Wagon”. It was demolished about 1960. A parking lot is currently located on the theatre’s site.

Grand in Orlando is Renamed the Astor

Orlando Fla – The old Grand Theater, which has run the cycle of motion picture advancement from the old hand-operated crank-turned projector to the present wide-screen process has been sold by the Florida State Theaters for $120,000 to the B.S. Moss Theater Corporation of New York. The Moss corporation operates a chain of theaters in New York and New Jersey, and has now acquired four in Florida, the Ritz in Hollywood, the Ritz in Ocala, the State in Gainesville and the Grand in Orlando.

The name of the Grand has been changed to the Astor.

According to Charles B. Moss, president of the purchasing corporation, the Astor, when the renovation program is completed, will be the â€œdoggiest thing in townâ€. There will be new upholstered seats, a new sound system, a new wide-screen, new carpeting, restrooms and air-conditioning. A refreshment bar will be built in the lobby and the walls of the auditorium will be covered with a cushion-tone acoustical tile.

For those who are wondering, “doggiest” is defined as stylish or showy according to Websters.

From Orlando a postcard view of the Grand Theatre.

Please see the photos section for photos of the interior at grand opening, and a c.1930s picture of the Grand its ushers.

This reopened as Astor on September 25th, 1953. Grand opening ad in the photo section.

Last day of operation looks like December 1, 1962, with “Blood of the Vampire,” “Night of the Blood Beast” and “Bucket of Blood.”