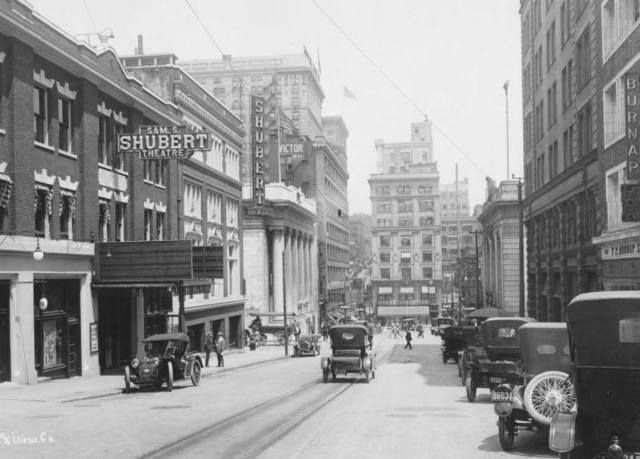 The Sam S. Shubert Theatre was one in a string of theatres owned by the Shubert Brothers, primarily on the East and West coasts. Ultimately, the company would control 1,000 theatres across the country.

Sam S. Shubert was killed in a railroad accident at age 27, and local newspaper accounts noted he was on his way to Kansas City at the time of the accident. Company historians later disclosed that the Shuberts treated accounts of their personal lives like press releases, and that the Kansas City trip was most likely a public relations gesture to build support for the theatre. Sam S. Shubert was memorialized nonetheless, most prominently in the mosaic floor of the theatre where his name was spelled out.

The theatre was built at a cost of $131,000 and opened on October 1, 1906. Despite seating 1,700 patrons, it was renowned for its intimacy. This effect was further enhanced by the absence of support pillars, as balconies and the ceiling were supported by steel beams providing an unobstructed view of the stage from any seat. Warm red tones in the wall hangings and curtains contributed to the ambiance of coziness.

Despite the success of the theatre’s legitimate offerings during the 1900’s, 1910’s and 1920’s, distractions like the automobile and motion pictures cut into the Shubert’s business. The owners tried to compete, eventually spending $8,000 to install a new sound system that would enable them to show movies. “All Quiet on the Western Front” was the first motion picture exhibited at the theatre in 1930 and the Sam S. Shubert Theatre still remained first and foremost a live theatre.

Despite the additional programming, financial pressures from the Great Depression doomed the theatre. In 1936, the Sam S. Shubert Theatre was razed to its basement, which was used as a parking garage for the remaining office tower. From a hole in the ground, a new Shubert Theatre later sprang, only to be reduced to the same fate three decades later.

Here are a couple of links from the Kansas City Library to Photos, info & postcards of the Shubert:
View link

Added another circa 1920 photo.