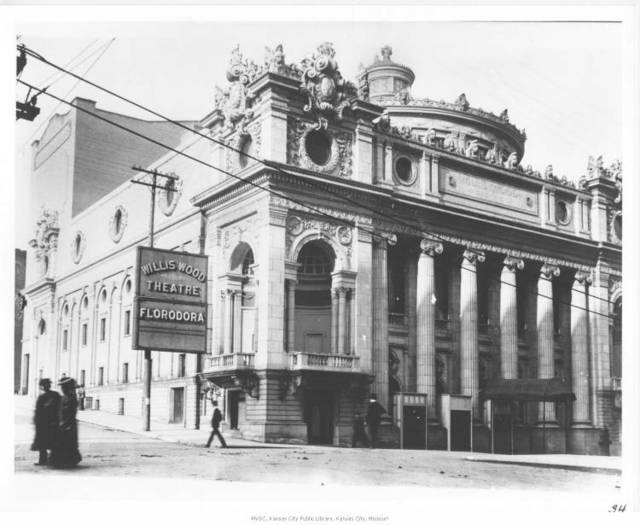 The fire that destroyed the Coates Opera House in 1900 left Kansas City with no ‘first-class’ theatre. Colonel Willis Wood, a dry goods magnate from St. Joseph, arrived in Kansas City around the same time as the Coates fire. His lifelong interest in the theatre led to his building an opulent palace wherein he could share with Kansas City theatregoers his love of the stage.

The Willis Wood Theatre, located on the northwest corner of 11th Street and Baltimore Avenue, opened on August 25, 1902 with the play “A Modern Magdalen” performed by the Amelia Bingham Company. Designed by local architect Louis Curtiss – who was also responsible for the Baltimore Hotel across from the Willis Wood Theatre and the Boley Building two blocks away – the Willis Wood Theatre oozed extravagance. Colonel Wood had definite ideas about how his playhouse should look, and Curtiss closely followed his wishes. The exterior was of yellow brick and white terra cotta, the gleaming effect of which was particularly enhanced by sunshine. The temple-like structure was embellished with extensive confectionery scrollwork atop the corner balconies.

In the auditorium, the palette ran reds and greens, blues and golds and yellows in substantial quantities. A series of columnar sculpted nude female figures adorned the walls in between the box seats. Their outstretched hands were utilized to hold curtains and draperies, which were strategically placed to cover the figures. The elegance of the surroundings was echoed in the calibre of productions on the stage. As the only house in Kansas City presenting ‘first-class’ theatre, the Willis Wood Theatre developed a reputation as the place to see and be seen among Kansas City’s elite. A typical evening began with dinner at the Baltimore Hotel, then a brief stroll through the tunnel that ran under the intersection of 11th Street and Baltimore Avenue to the theatre. The same throughway would later be used to visit the bar at intermission, earning the moniker ‘Highball Alley’. Of course, if a show was less than engaging, patrons could make a hasty and unobtrusive exit via the same tunnel.

With the opening of the Shubert Theatre in 1906, the Willis Wood Theatre had a fierce competitor for local legitimate dramatic productions. It was a conflict the Willis Wood Theatre would not survive. Stock theatre was tried and failed. Burlesque was introduced in the 1913-14 season. When that effort proved fruitless, a $20,000 pipe organ – a duplicate of the organ in the ballroom at New York’s Hotel Astor – was installed and the house was remodeled for motion pictures. Movies failed to draw crowds, so management decided to again try stock. In January, 1917, a week before the last stock company was to end and movies were to be shown yet again, the Willis Wood Theatre was virtually destroyed by a fire – all that remained were the exterior walls. This shell stood for another year before it was finally razed and the 20-story Kansas City Athletic Club building – then the city’s tallest structure – was erected. It still stands as the Mark Twain Tower.

Another view from 1908 View link

I have a postcard for this theatre that’s different from the ones in the links above, or the one at the kclibrary. It’s pretty much taken from the same angle, and the lot on the right is still empty (trees). “THE SULTAN OF SULU” is advertised, probably the 1902 musical comedy by George Ade. Which means the picture was taken in it’s opening days!

The postcard can be seen here View link

Here’s a report by the fire chief of Kansas City describing the fire that destroyed the Willis Wood Theatre in 1917:

“Willis Wood Theatre, northeast corner Eleventh and Baltimore, January 8th, 1917. The first alarm was received at 12:50 A. M., followed by a second alarm at 12:51 A. M. The building was a three-story brick theatre owned by the Willis Wood estate, and occupied by Messrs. Richards & Flynn, as a moving picture theatre. Upon arrival of the Department the fire had spread throughout the entire building. The fire was practically confined to the theatre, with nominal exposure losses on the Home Telephone Company’s building and the Kansas City Southern Railway building, adjoining. The loss on building and contents was $87,296.51, the total insurance being $551.549.82. Eight single streams and two turret streams were used in extinguishing the fire; cause, unknown.”

The theatre was not doing good business at the time of the fire. Odd how fires seem to start in businesses that are losing money.

In 1923, the Kansas City Athletic Club acquired an unfinished, 22-story building at Eleventh Street and Baltimore Avenue , former location of the Willis Wood Theater. In 1932, however, during the Great Depression, the Continental Hotel Company took over the 22-story clubhouse, leaving only the six topmost floors devoted to the club itself. For a period in the 1960s, the hotel contained a branch of the Playboy Club. In 1982, the building was remodeled and renamed as the Mark Twain Tower, an office building. The club retaining the rights to the top six floors.