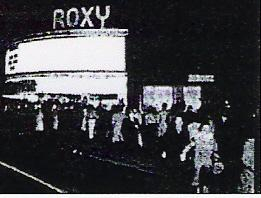 The Liberty Theater was built during a time when heightened excitement and enthusiasm greeted motion pictures and their presentation. The building was completed and opened July 11, 1918, and especially designed for moving pictures. It was taken over by the Universal Pictures chain in 1926 and they operated it until 1927.

In March of 1927, United Artists leased the theater and the Liberty Theater’s policy changed with its new operators to continue to show a pre-release film for as long as it continued to draw a crowd. The movies were ones that had just been completed and were not shown at any other theaters until the runs at the various United Artists houses were completed.

As the decades wore on, the Liberty Theater changed hands and was renamed the Roxy Theater on October 10, 1947. As moviegoers fled downtown for suburban malls and theater complexes, the Roxy Theater succumbed to the fate of large swaths of the downtown loop. It was closed on January 9, 1971 with Jerry Orbach in “The Gang That Couldn’t Shoot Straight”. In the name of urban renewal, the buildings on the entire block were demolished in the early-1970’s, in this case to make room for the office complex City Center Square.

It was here at the Roxy Theatre that Stanley Durwood (of Durwood Theatres/AMC Theatres) thought up the concwept of the multi-screen theatre.

Main Street between 11th and 12th Street was beutifully lit up with the Paramount and the Roxy Theater full of Neon Marquee’s. I watched as the Roxy Marquee was ripped down – broken neon everywhere. It was really sad. The replaced marquee was UGLY and I told that to Ralph Burhmaster – the Manager and also to Stan Durwood. Stan Durwood put money into the Roxy and also the redo of the Roxy into the Towne 4 Theaters knowing that they were going to be demolished a few eyars later. He set himself up to get top dollar for those two buildings. I still wish that the Roxy would have been saved and incorporated into the City Center. The CC was supposed to have a 6 screen movie theater in it. Never knew what happened.

Saw Woodstock at The Roxy during its first run. What a great place. Would love to see some interior pictures.

We certainly lost some beautiful treasures downtown. Many of the theaters were some of the finest in North America.

The Moving Picture World had this announcement about the proposed Liberty Theatre in its issue of November 17, 1917:

“KANSAS CITY, MO. — Overland Amusement Company has plans by Frederick E. McIlvain for fireproof moving picture theater, to be known as the Liberty.”

Frederick E. McIlvain was a partner in Jackson & McIlvain, who designed the Globe Theatre in 1913. Their partnership was dissolved in 1916, so McIlvain designed the Liberty on his own.

The Roxy Theatre in downtown Kansas City, Mo was located at 1104 Main Street. I worked there in the 1950’s when the theatre hosted Cecil B. DeMille’s “The Ten Commadments” that was presented on a reserved seat engagement for over six months! I sold group sales for this epic film and the Roxy Theatre was the perfect theatre that continued for many years after DeMille’s masterpiece! I actually worked for Stan Durwood who was the father of the multiplex theatres. His brother Richard Durwood and his Father Ed Durwood were both actively involved in the operation of the Roxy in Kansas City! THOSE WERE THE DAYS, never to be repeated because they don’t build theatres like that any more! Sadly! Chuck Fisher.

1957 photo added, courtesy of the AmeriCar The Beautiful Facebook page.

AMC Theatres closed the Roxy Theatre on January 9, 1971 with “The Gang That Couldn’t Shoot Straight.” An urban re-development plan called 12th and Main (called City Center Square at opening) was announced in 1972 in which AMC closed the former Paramount turned Towne 4 on February 6th. That was followed by auctions of both the Towne and Roxy.