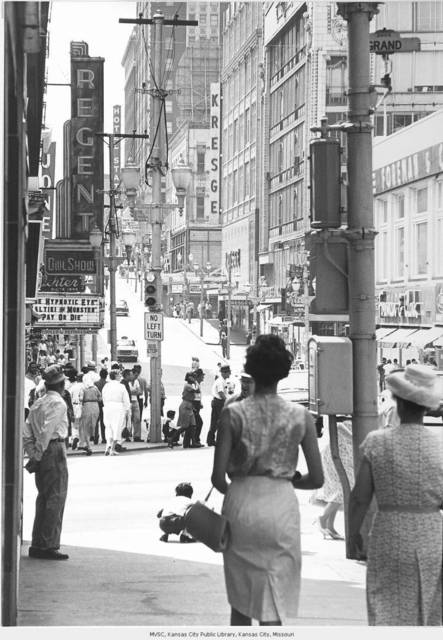 Located in downtown Kansas City, the Regent Theatre was built in 1914 for Frank Newman. The Regent Theatre was opened March 26, 1916 with Fannie Ward in “For the Defense”. It was equipped with a Kimball organ. It bought in 1920 by Maurice, Edward and Barney Dubinsky, who then incorporated as Dubinsky Theatres. In around 1943 until at least 1950, it was operated by Commonwealth Amusement chain, and they had architecture firm Boller Brothers remodel the theatre in 1947.

Later going back to Dubinsky Theatre, who later changed their (and the company’s) name to Durwood, they built a chain of theatres in the Kansas City area. In 1961, the chain passes to Edward’s son Stanley, who changed the name to American Multi-Cinema (AMC).

It 1963, AMC opened its first multiplex cinema, the Parkway Twin. Later in the early-1960’s, the Regent Theatre closed on May 12, 1964 and was converted into a men’s' clothing store. It was demolished in 1985 to make way for an office tower.

Thanks all. Would anyone be interested in helping me get to the bottom of the mystery theater on Main st. Believe it was located at the old Royal address, closed in 1936. It is known to have operated in the late 40’s and early 50’s, showed cheap movies like the Regent, had no marquee or apparent name and never had an ad in the paper. A real bare-bones operation. Seemed to have some seedy looking characters hanging around it. I know others that remember seeing it there but no one seems to know any more about it than I do. I have a theory but no proof.

The first comment for this theater notes its demolition for an office tower. There’s no trace of the theater building currently. Status should be closed/demolished.

Hey Dave W. The mystery theater you are looking for may have been the Palace, which was a block north of the Royal on Main Street and was open into the early fifties. It had a marquee in the forties, but it could have been taken down in later years. I asked a friend who was acquainted with the theaters in the downtown area, and he said it was indeed on the seedy side.

David and Noelle’s list of known Boller Brothers theaters says that the remodeling of the Regent Theatre by Robert Boller was a 1947 project.

The original architect of the Regent Theatre in 1916 was H. Alexander Drake, who also designed Frank Newman’s Royal Theatre of 1914 and the Newman Theatre of 1919, which later became the Paramount. According to the March 4, 1916, issue of The Moving Picture World, the Regent was then nearing completion:

“Kansas City, Mo.—Work on the new Regent theatre being erected here at 107 East 12th St., by Frank L. Newman, manager of the Royal, is rapidly progressing and the theatre will probably be opened by March 10. One of the problems of Alexander Drake, the architect, was to design a house with a capacity of 700, as the Regent will have, on a lot 38x76 feet. This was accomplished by an unusual balcony, made possible by the fact that the theater is fifty feet high. A grilled celling, above which three 36-inch fans will suck air into ventilating shafts is one of the many interesting features being introduced by Mr. Newman. The entire cost of the structure is to be $60,000.”

My mother told me when I was a child, that her mother used to refer to the Regent as “the smelly feet theatre”.

I worked nights as an usher and operated the refreshment stand at the Regent Theater in 1950. After the bars closed, members of the Kansas City crime family and their girlfriends arrived and stayed till the last show ended. The woman standing inside the refreshment stand in one of the four the historical pictures was the theater manager—I don’t recall her name, just that she was a handsome woman who drove a large, shiny black sedan. Bill P

I wish there had been pictures posted of the interior – it was quite ornate for a small theater that included a balcony and quite ornate ceiling. Before it was demolished, it was converted into a much larger Penner’s Men’s Clothing Store. The leveled the main floor and redid the elec and Heating AC for that new area – not much of the actual auditorium was destroyed but I do remember taking a peak inside and I was quite impressed. It remained a Penner’s fro about 4+ years and then much of the stores on 12th were demolished, including some great restaurants and Adam’s Men’s Store on the Corner. I tried to see as much of the demolition of the Regent as I could, just like I sadly watched the demolition of the old Paramount and Roxy Theaters – treasures lost. The Regent still had its Theater Organ and Pipes etc along with its old Piano also destroyed during the demolition. It was easy to see just how ornate it was. Apparently, it was built primarily for movies but did have narrow stage area with rigging still in tack. I remember the Regent showing at least One Burlesque B&W film after two regular movies that were very popular with the GIs overseas during WWII. They were pretty harmless and also some of the skits pretty funny – they can be seen online. Downtown KC has lost so much of its history. I do not remember what Bank Building was built in its place, I want to say Mercantile Bank but what every it was, it did not last and I think the building is now just condo’s.

This opened on March 26th, 1916. Grand opening ad in the photo section.

The Regent Theatre opened as a premiere motion picture house with a Kimball pipe organ, live orchestra and launching March 26th, 1916 with Fannie Ward in “For the Defense.” The Regent would convert to sound to stay current.

But with the impact of television and competition from new theaters, the Regent devolved into second-run double features followed by its final period as a faded, deep discount sub-run grindhouse showing three shows continuously from late morning until after midnight. No showtimes were posted or necessary in the advertising. The Regent closed on May 12, 1964 with Glenn Ford in “Courtship of Eddie’s Father,” Inger Stevens in “The World, Flesh & Devil,” and Glenn Ford in “The Sheepman.”

The theatre was redesigned for Pener’s, a men’s clothing store, by architects Bloomgarten & Frohwerk in 1965. At the end of its 20-year lease, the store moved and the former theatre building was demolished reportedly to make way for the AT&T Pavillion project as parking garage but appears to have been used for the 1201 Walnut Building skyscraper built by HNTB Architects in 1991.