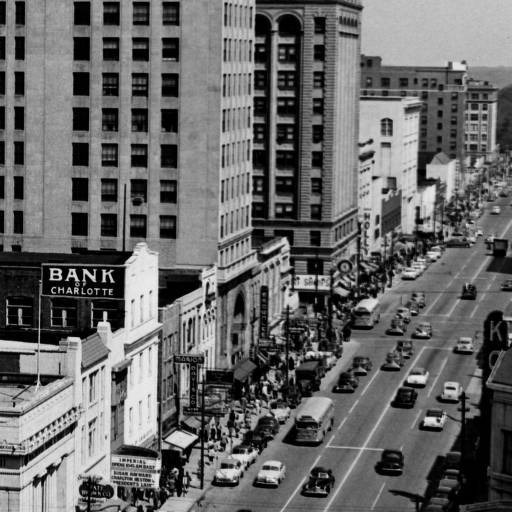 The Imperial Theatre opened on March 31, 1919 with Marguerite Clark in “Mrs. Wiggs of The Cabbage Patch”. It was Charlotte’s top movie theatre until the larger and more ornate Carolina Theatre opened in 1927. A fire gutted the theatre building in 1931, leaving only the four walls standing. These were retained in the rebuild and it reopened on February 18, 1935 as Charlotte’s only Atmospheric style theatre, the New Imperial Theatre, with Claudette Colbert in “The Gilded Lily”. The rather narrow auditorium had a balcony and the side walls were decorated in a Spanish Colonial style. Overhead was a blue plaster sky with electric stars and projected clouds.

The Imperial Theatre was operated by Paramount Pictures Inc. through their subsidiary H.F. Kincey in the 1940’s. It had a successful run showing mostly first run movies for several decades until the opening of the Park Terrace Theatre in the suburbs forced its closing in 1964. The building sat empty for a few years and was torn down in the late-1960’s.

Thanks it will be great to see the lost theatres.I have a shot of the Thunderbird Drive-in There,too,

This was a tragic loss to the culture and heritage of 20th Century Charlotte. I saw several films there, but by far the most memorable was: Dr. No. The first James Bond thriller had just been released, and it was scintillating – every school boy’s dream. What a pity that this gem of a theater has been lost.

Cecil B. DeMille’s “THE TEN COMMANDMENTS” played here as a Reserved Seat Exclusive Engagement Showing at the Imperial Theatre on February 28,1957. It was in fact the only showing of the film in the Carolinas. Tickets for this event when on sale in advance for its premiere showing in the Carolinas with two performances daily. Presented in Stereophonic Sound.

This is a comment from Shannon Smith from the Facebook group “Charlotte N.C. The Past and Present” – I’m posting this with her permission. Fascinating look into the use of the Imperial after it closed. Many thanks to Shannon!

“In the summers of 1965 &1966, CMS had a theatre arts summer school in the Imperial Theatre. There were students from all over the county. The theatre was already closed for movies, but it was originally built as a performing hall. It contained all of the necessary equipment to move scenery, work lights and have wings to make it possible to get on and off the stage easily. There was a basement where dressing rooms were. We had our own full orchestra, a singing tutor and Mr Hall taught us the proper lighting techniques as well as proper theatre etiquette. For 5 of the 6 weeks of the school, we put on a 30 minute musical and even had to add "matinee” on Wednesday’s. The cost for admission was 50¢ and we usually had the house half full or better. It was because of Mr. Hall’s vision that CMS agreed to this for these two years. It made a HUGE impact on all of us who attended, pointing some to a future career.

I am so glad to see Imperial get some recognition. Went to a lot of movies there. My brother Wallace Treadway was usher there in the 1950’s after school. He graduated 1955 from East/meck.

Zelda and Susan Walker: My name is Raymond and I have in my possession from the February 28, 1957 advertisement from The Charlotte Observer for the Imperial’s showing of Cecil B. DeMille’s THE TEN COMMANDMENTS which was the only reserved seat showing of the film in the Carolinas. I also have the advertisement for its Eastern North Carolina premiere where it played in Raleigh first run which was also a reserved seat engagement. If you need to see them please contact me at Thanks.

The Imperial Theatre’s demise came in 1964 when the opening of the Park Terrace Theater brought this cinema to closed its doors. Not to mention faced strong competition from the state of the art and bigger Charlottetown Mall Cinema 1 & 2 which was the state’s first-ever twin theater that opened a year earlier in 1963. 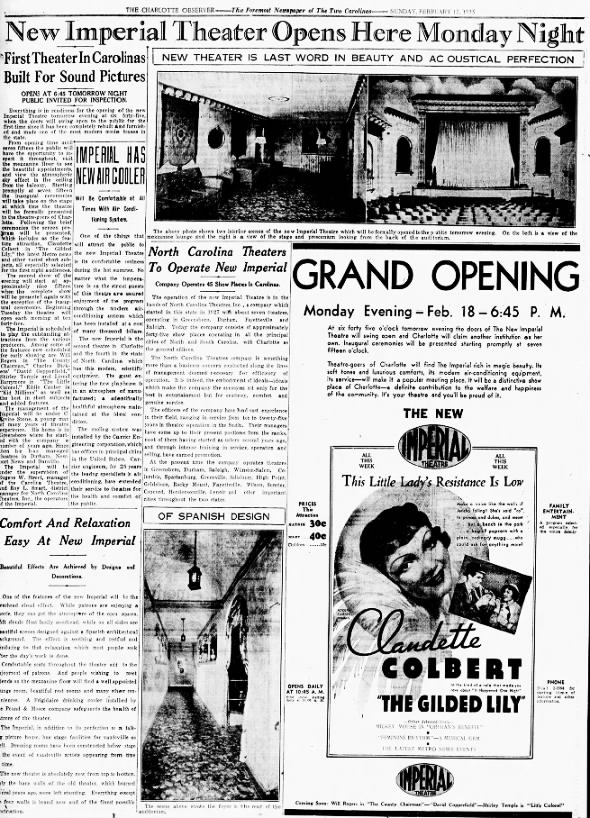