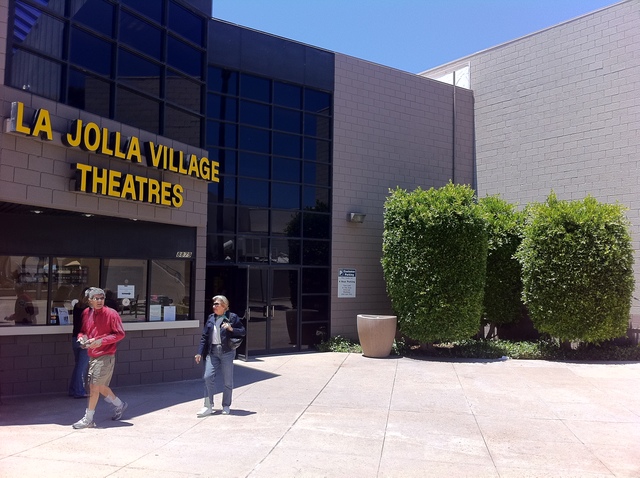 The La Jolla Village Cinemas was closed by Landmark Theatres on June 7, 2015. It is scheduled to be demolished to built a Nordstrom Rack store.

Man, these guys run the coolest series of midnight movies twice a year. MIDNIGHT MADNESS. Once in the fall, and again in the spring. In fact, with the exception of a fluke or a one-off every now and again, this theater is the only one in San Diego cool enough to midnight flicks. you can check the schedule at landmarktheatres.com. I go to like every one of these. There are so few people in this town that actually care about their moviegoing experiences. Everybody that lives in this town, and comes to this website should come out to these flicks!

This opened on December 18th, 1979. I uploaded its grand opening ad here.

There’s a somewhat interesting booking phenomenon going on in La Jolla right now… Since the opening of the new ArcLight, both AMC and Landmark have been robbed for content. ArcLight is getting pretty much everything, as one might have guessed. But on December 14, Landmark, which has not played a big blockbuster in well over a decade, will be getting “The Hobbit” alongside the ArcLight. This is somewhat bizarre because, pre-ArcLight, AMC definitely would have been the one to get that film.

For those with knowledge of how booking works: Is it possible that WB was not satisfied with the amount of seats ArcLight could provide for “The Hobbit” (their auditoriums are rather small, only 3 exceed 200 seats), but ArcLight didn’t want AMC to get the film as they are a more direct competitor, so WB agreed to run the simultaneous engagement at the Landmark? This is the weirdest booking I have ever seen a local Landmark get.

The AMC will probably close or become a 2nd run theatre.

No, AMC is actually upgrading to turn into a luxury theater—basically a Dine-In without the dining part—which I think will allow them to double-book with ArcLight. The question is why Landmark is getting a first-run blockbuster product in this case and not AMC, which has historically always gotten it.

It’s a sort of a last attempt by Landmark to save the place. With the ArcLight moving in, it’s caused a serious stir up. Since it’s close enough to be considering the same market all three theatres are fighting for certain films. I used to run The Dobie Theatre in Austin for Landmark and they did the same thing there. It was a last ditch. While the ArcLight didn’t seem like a threat with $18.50 tickets, they haven’t been charging anywhere near that and it’s a real threat to both those theatres off Nobel. The Dobie lasted about 2.5 years after they started splitting theatres half mainstream half art house. Time will tell if it works for La Jolla Village.

Danny, I very quickly noticed that booking issue as well. However, it seems that Arclight and Landmark are getting several of the same films. Arclight gave Hobbit quite a few seats despite their smaller theatres because they have shorter downtimes, as well as showing it in many auditoriums. Arclight has basically gotten nothing since Les Mis, as they lost Django, Zero Dark Thirty, and Gangster Squad, which stinks in my opinion because I really don’t want to support a Chinese-owned “American” company. I wish all the best to this Landmark, as it’s a nice place with great staff. I’ve seen a large number of films in there and I hope it continues to succeed.

Landmark’s La Jolla Village Theater will show its last films Sunday, as it set to be torn down to make way for a Nordstrom Rack.

The four-screen theater, which shows mostly independent and fine-arts films, opened in 1979.

The shopping center, called the Shops at La Jolla Village, at 8801 Villa La Jolla Drive, is undergoing a major revitalization that will include a 32,000 square-foot and two 6,000-square-foot commercial buildings. It’s the first major change for the mall since 1990.

Also leaving are a TGI Friday’s and B.J’s Pizza. Elijah’s Deli moved to Kearny Mesa earlier this year. The Whole Foods, CVS, and Aaron Brothers are expected to remain on the other end of the strip mall.