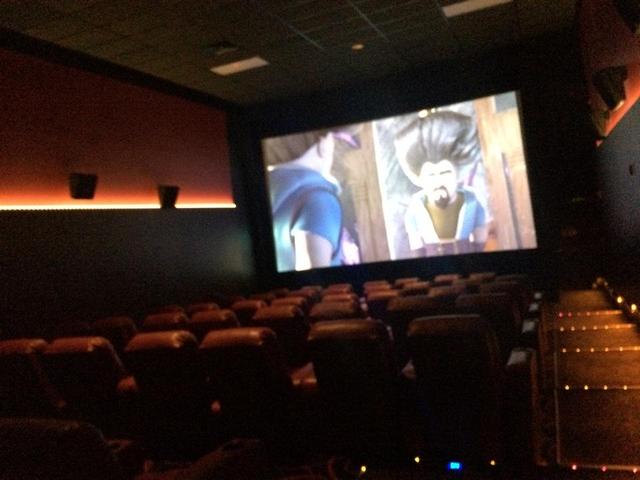 I helped open this Theatre. It has 12 Strong Projectors with matching Strong platters. Opened as AMC’s first all SDDS houses. Biggest screens are 4, 5, 9, and 11 with 9 being the widest screen. 12 Taurus screens. In La Jolla Village Square the theatre opened with a Tony Curtis tribute with 12 of Tony’s movies all starting with a personal introduction from Mr. Curtis himself. The last non stadium seating theatre AMC built. One of my Favorite theatres!

That photo is of the theatre across the street. Here is a picture of the AMC La Jolla 12.
View link

Rumored to be undergoing a remodel at yet-to-be-determined date, according to the Cinema Society, which has changed venues as a result. Fork and Screen, maybe? Eliminating all or part of the Theater 10-12 corridor for a kitchen would work, although the back of the concession stand is pretty big already. They applied for a liquor license several months back.

AMC has now announced that the site will be converted to recliner seating in the Spring, but not a full Fork & Screen. One wonders if this will allow the theater to be classified as a “luxury theater,” thereby allowing AMC to book the same films that the new ArcLight La Jolla does. (ArcLight is, as expected, getting all the profitable stuff, leaving AMC the leftovers.)

When I asked AMC via Twitter if the addition of recliners would entail installing stadium risers, they responded that there would be “some.” There will have to be some level of remodel, I’m sure, because as it is, the recliners wouldn’t even fit through the doors of 8 of the auditoriums.

This is indeed a luxury theater with recliners and a bar. Unlike the ArcLight, you can carry your alcoholic beverage inside the theater. The over-21 shows with the bar are segregated from the all-ages screens. Because it’s an AMC, you can use AMC discount tickets from Costco, so it’s a much better deal than the ArcLight. The ArcLight is kind of a disappointment. I was hoping for less mainstream movies there. The AMC actually shows more off-the-beaten-track films [for example, SNOWPIERCER], probably because they are getting the ArcLight’s leftovers.

This theater has been renovated into a recliners reserving seat theater according to AMC THEATRES. People who are 21 years old like myself go to the bar must show their ID Card before entering the bar. I thought Arclight was better but apparently arclight is not having a better deal. I say AMC got the best La Jolla 12 in La Jolla,CA especially they can carry their alcohlic beverage inside the theater.