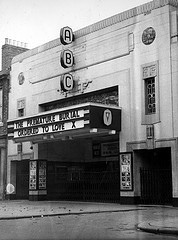 Opened as the Lonsdale Cinema on 21st September 1931 it was operated by Sydney Bacon Pictures Ltd. Architect Percy L. Browne & Son of Newcastle designed a superb cinema that was equipped for films and stage show use. It had a Christie 2Manual/10Rank theatre organ that was opened by Harold Meredith. The proscenium opening was 48 feet wide, the stage 26ft deep and there was six dressing rooms.

Seating was provided in stalls and balcony. A feature of the foyer decoration was a stained glass window which depicted Carlisle Castle.

The small Sydney Bacon circuit was taken over by Union Cinemas in 1935, and in October 1937 they were taken over by Associated British Cinema (ABC). From 15th January 1962 in common with most other cinemas operated by ABC, the Lonsdale was re-named ABC. It continued as a single screen cinema until it was twinned, re-opening as a 586 cinema in the former circle on 25th May 1972. The former stalls area became an Alpha Bingo Club. Much of the original decoration within the auditorium was removed or covered over, and it was at this time that the Christie organ was removed and sent to Harrogate for preservation.

From 9th July 1978 ABC leased out the cinema to an Independent operator R.J. Towers and they twinned the former balcony screen which re-opened with seating for 410 and 230 on 19th December 1978, reverting back to its original name, Lonsdale Cinema. The bingo club in the former stalls area became a Gala Bingo Club. In September 1997 a third screen seating 50 was added and the current operators, City Screens Ltd, were operating it.

City Screens Ltd. then opened another 2 screens in an adjacent building which had formerly been a post office. These seated 122 and 96 and opened on 16th July 1993. The 96 seat screen was enlarged to 116 seats in 1996. In early 2004 the Gala Bingo Club re-located to new premises and that section of the building is now un-used.

In December 2005, it was announced that plans were being put forward to demolish the Lonsdale and build housing on the site. The two screens in the former post office building would not be affected by the re-development. The cinema closed on 23rd April 2006 when the lease ran out.

The Lonsdale Cinema was designated a Grade II Listed building in June 2007. It was de-listed in March 2010, but still remained in the towns' conservation area. Demolition began on 13th January 2014, to create a car park on the site.

Scroll down for vintage photo of auditorium:
View link

Page 14 of brochure linked above.

In a recent news letter from the CTA, it’s been sold at auction and reported that the new owners plan to demolish the building.

Howdy, I am looking for information about the Synchronome clock that was originally installed in the Lonsdale Cinema when it first opened in 1931. I believe the clock was removed during the remodeling done in 1972. Does anyone know who might have purchased the clock in 1972? Does anyone have pictures of the clock inside the theatre? Any help is much appreciated, thanks and drive carefully. johnrobinson

Shows how much ‘listing’ and a ‘conservation area’ means, if this building was still demolished…