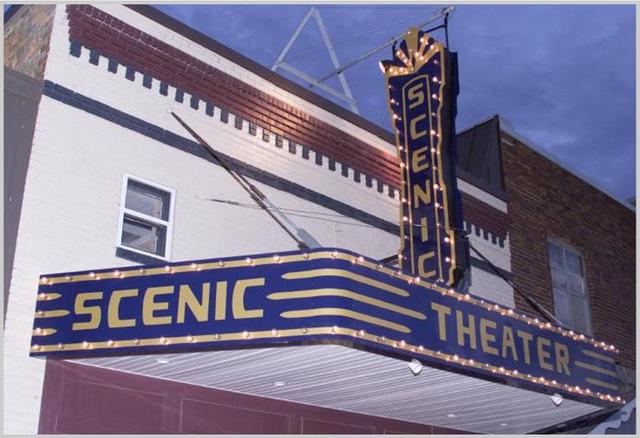 The Scenic Theater was opened in 1911.

This theater has been completely renovated and also made handicapped accessible. Some of the art deco indoor lighting and also the lighted marquee have been restored. (which you can see on the official site photo gallery). There have been 4 owners of this theater in the years since it was built in 1916, including my wife and I as current owners. It seats 200. We show current run movies on the weekends and on special occasions during the week.

Happy to see the cinema saved, but the story illustrates something wrong with our federal government: use of Dept. of Ag. money (from the taxpayers) to help save the cinema. Better that the locals, perhaps with support from Bismarck, keep the Scenic open. Nonetheless, may the Scenic now see prosperous times.

Edlambert, I think this is a great use of taxpayer money! The movies are part of American history and that should be preserved. According to the story I just read, private citizens donated to the tune of $76k.

LISBON, ND – The only theater in the small town of Lisbon, North Dakota, is iconic.

The rural movie house is famous for having the longest continuous run of any show hall in America.

This cinema has been center stage in this little community for almost as long as Hollywood has been around.

The first movie shown here was in 1911, a silent film called “Nemo.” Long time customers like William Sullivan remember seeing those black and white classics at the Scenic.

“They had a piano down there, and they played the music, like when the horses were galloping,” says Sullivan.

Movie fans like Dorothy Hanna hoofed it to take in a show when the cost of admission was 10 cents.

“In the summertime my sister and I used to walk in from the country, about a half mile, and we went to the Sunday matinee,” says Hanna.

“When I was younger, it was Shirley Temple and there were some John Wayne movies,” says Evelyn Hitchcock, Lisbon.

Evelyn Hitchcock is 100 years old, but she still enjoys seeing a good old-fashioned film just like almost everyone else in town. That’s one of the reasons why the community raised over $100,000 to install state of the art digital projection equipment.

“My friends and I like to come here, we won’t drive to Fargo to see a movie. We want to see them here in Lisbon, North Dakota,” says Edie Reinke, Lisbon.

The cast of the Save our Scenic Committee was made up of moms who wanted to preserve a place where their kids could see a show.

“This was the first theater that my parents took me to, it was the first movie I took my son to, and it’s a family oriented place to hang out,” says Kari Webb, Save our Scenic Committee.

The Scenic is open weekends and is one of the few theaters in the country that serves up popcorn topped with real butter.

“We go through quite a few pounds on a weekend, but it’s worth it,” says Betty Michels, Scenic Theater Co-owner.

How long can this little cinema on the prairie continue to stay open?

“Hopefully it will stay here forever. We’ve committed to keeping it running as long as we can,” says Alfred Michels, Scenic Theater Co-owner.

Guarantees like that are sure to get rave reviews from this audience.

Volunteers play a role in helping this family owned theater stay open. A supporting cast of locals donate their time at the concession stand and box office to help the owners make ends meet.

The population of Lisbon is around 2,000.