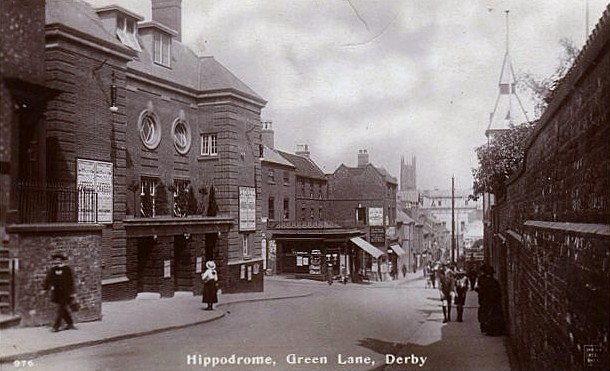 Opened as the Hippodrome Theatre on 20th July 1914 with a show named “September Morn”, it was Derby’s premier variety theatre and attracted big name stars over the years. Located on a prime site on the corner of Green Lane and Macklin Street, it was designed by architects Marshall & Tweedy of Newcastle on Tyne, in a lavish Baroque style.

Seating was provided on three levels: 1,000 in the stalls, 550 in the dress circle and 351 in the upper balcony. There are two boxes, one each side of the proscenium opening. The squared proscenium opening is 38 feet wide and 35feet high, it has a stage 40 feet deep and ten dressing rooms.

It was taken over by Associated Theatres (P.A.& D.) Ltd. and was converted into a full time cinema by the addition of a fully equipped projection box being built at the back of the upper balcony. Opening as the Hippodrome Super Cinema on 15th September 1930 with Janet Gaynor and Charles Farrell in “Sunny Side Up”.

In June 1936 it was taken over by County Cinemas circuit and they carried out some modernisation in 1938. This was mainly new projection equipment, stage curtains and a remodelling of the two stage boxes to give a sleeker design. It re-opened on 30th July 1938 with Jon Hall and Dorothy Lamour in “The Hurricane”. County Cinemas were taken over by the Oscar Deutsch owned Odeon Theatres chain and the Hippodrome Super Cinema was then operated by Odeon Theatres until it closed on 28th October 1950 with Valerie Hobson and Stewart Granger in “Blanche Fury”.

It was purchased by Stoll Theatres Ltd. and re-opened as a live theatre on 23rd December 1950 with the pantomime “Dick Whittington and His Cat” starring Billy Walker. The name had reverted back to Hippodrome Theatre and it attracted many famous names back onto its stage. Sadly, the effects of television were affecting audience numbers by the mid-1950’s and good touring shows were not so plentiful, ‘nudie girly’ shows were booked in week after week to keep the theatre going but audiences remained sparse. It closed on 31st January 1959 after a season’s run of the pantomime “Queen of Hearts” starring Jimmy Paige.

It stood empty for three years until it was purchased by Mecca Ltd and converted into a Mecca Bingo Club which opened in 1962. At first occassional ‘one night only’ live shows were held and the projectors were brought back into use when games of ‘Horsey, Horsey’ (betting on numbered horses from secretly filmed races) were part of the evening entertainment. For the past several years it had been operated by Walkers Ltd. of Wakefield and was known as Walkers Bingo Club. The bingo hall closed on 26th January 2007.

On 19th November 1996, the Hippodrome Theatre was designated a Grade II Listed building by English Heritage.

ALERT….The new owner was carrying out ‘remedial work’, following a small fire in February 2008. See comments posted on March 28th 2008 and beyond….

Latest news in, the recent appraisal survey has found the vast majority want this Theatre restored. The estimated cost,£15.million

The very damaged remains of the building are still there, awaiting some form of restoration.

A point I have not seen made yet is that in its heyday the Hippodrome was an important Jazz venue. Many of Britain’s biggest stars played there, including Ken Colyer, Chris Barber, Kenny Baker, Sir John Dankworth and Humphrey Lyttleton (whose band accompanied the great Jimmy Rushing on one occasion). If it is ever restored as a theatre, I hope that that tradition will resume.

yet another major “FIRE”, The developers seem hell bent on completely destroying this building.