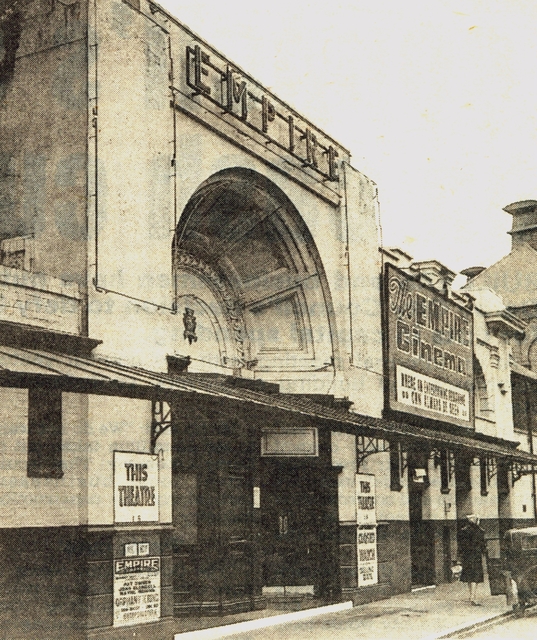 Opened on 10th October 1910 as the Victoria Electric Theatre with a programme of short subjects: “Under Western Skies”, “The Governor’s Daughter”, “His First Contact”, “Tom Thumb in Love” and “The Marriage of Maggie”, plus variety acts on the stage. The architect was J.H. Morton who designed a pleasant purpose built cinema (the second to be built in Derby). It had a very ornate entrance that had a concaved dome over the paybox. Throughout its entire life, it never had a foyer. Seating was for 800 on a single floor and business was so good, that by 1914 the auditorium was extended with 200 more seats provided in what was called the ‘lounge’ area. It was known as the Coliseum for a while from 1915 and ‘live’ posing nude shows and talent contests complemented the film programmes.

From 26th December 1916 it was re-named the Empire Cinema and in 1921 Edgar Duckworth purchased the theatre and re-named it Empire Super Cinema. In 1928 the walls and roof were raised at the rear of the building and a balcony seating 400 was installed.

From November 1930 it was taken over by Associated British Cinemas (ABC) and they played all the best films coming out of the M.G.M. and Warner Brothers studios for many years until they had opened their own Regal Cinema in East Street in 1938. ABC relinquished their lease on the Empire in October 1940 and it was taken over by an Independent operator; Marks Circuit Cinemas of Manchester.

Edgar Duckworth took back control in 1948 and restored the by then deteriorated cinema. The auditorium was completely redecroated and the facade modernised which also included a new canopy over the entrance that had grills and pointed spikes on it, making it look like the lower section of a drawbridge gateway to an ancient castle. It re-opened as the Black Prince Theatre.

In 1953 it was ‘chosen’ by 20th Century Fox to be the ‘CinemaScope’ equipped theatre in Derby. The Rank Organisation who normally would play the Fox films in the city at either the Gaumont or Odeon, were in dispute with Fox over installation costs of equipping all their cinemas with the ‘new’ CinemaScope process with full stereophonic sound, hence independent cinemas like the Black Prince suddenly found themselves in the ‘top draw’. The Black Prince was the fourth independent cinema in the UK to be equipped with CinemaScope. It closed for a week at the beginning of March 1954 for a new screen to be installed (brought forward of the original proscenium arch), stereo speakers went onto the auditorium walls and new projectors were installed. It re-opened with Richard Burton in “The Robe” on 8th March 1954.

Over the following six years Fox supplied the product for the Black Prince, but Rank and most cinemas were also by then equipped to screen ‘scope films and the Black Prince went over to screening mainly second run and re-issue programmes. Audiences quickly dwindled and the cinema closed on 14th March 1960 with a special Charity evening of films which included the compilation documentary “The Golden Age of Comedy”.

The cinema was demolished a year later and the site became the entrance to the new Duckworth Square shopping precinct which was never a big success and after being vacant for several years, was demolished in November 2003.

Seven years after the Black Prince closed, the brand spanking new Superama Cinema opened around the corner on Colyear Street.