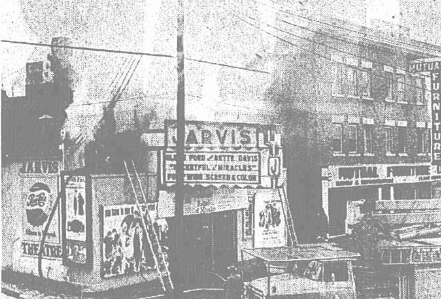 The Laurel Theatre was opened in December 29, 1913. In 1937 it was remodelled and renamed Jarvis Theatre. It was damaged by fire in January 1962, but reopened, only to be damaged by another fire in an adjacent furniture store in November 1962. The Jarvis Theatre closed July 30, 1963.

Ben – may have been a typo either on my part or the news article. I was transcribing from an article in the Binghamton Press in 1937 recording the sale.

Correction to the listing above; the theater didn’t close as a result of fire. There were two fires in ‘62 (one at the theater and one next door), closure happened in '63. Ben’s grandfather wanted to close in '61, and had planned to sell the theater to developers at that time, but relented because of community sentiment. This from news articles at the time.

One of my earlier comments from 4 years ago doesn’t show on the list of most recent comments so I have gone back & pasted it here to help clear up the looseness of adamghost’s post of Jan 30, 2016. It has the actual dates from those fires & the final closing of the Jarvis are accurate as printed in the Binghamton Press articles & are directly from my research at The Broome County Library.

Actually The Jarvis Theatre itself had a bad fire 10 months earlier on Wednesday Jan 3, 1962 & it took 2 months of repair & refurbishment to reopen for business on Friday March 2, 1962.

The theatre closed for good 8 ½ months later after the days' screenings on Tuesday July 30, 1963.

The vacant lots of both The Jarvis & Mutual Furniture were sold 2 years later to Public Service Garage, Rambler City, Inc. & was announced in June 14, 1965 with construction to begin in 10 days for the new Rambler dealership.

generalenigma, did Public Service actually open the Rambler dealership at that location or did they open Arrow Ford instead?

To be honest, once both the Jarvis Theatre & Mutual Furniture were leveled to vacant lots, I really had little interest in what became of the space. So I noted the intent which had been announced but never followed that up. Sometime when I get back to the library, I will do a quick check on that for you.

Yes, with due respect to Mr. Ben Sunness, I really only posted to fill in the early dates of the theater’s history (also culled from the Press). I didn’t restate what Ben had posted, other than the bit about the 1962 fire, because I didn’t want to be duplicative – it was already upthread and in great detail. I only wanted to succintly fill in information that wasn’t already posted, about the pre-Jarvis era, and I just added the later bullet points for completion. I didn’t realize that my own post would used as the basis for the main entry about the theater. I’ve researched theaters in the Binghamton area as a hobby since ‘77, so I’ve just been trying to go through and fill in a few blanks, not just with this one but with others, so I was burning the midnight oil for several days finding press and pictures on various theaters. Glad to have the clarity, myself. BTW, I did try to go back last night and see if the Press had Sunness’ name originally listed as John when it was first sold, but the internet wasn’t cooperating. Doesn’t matter – it clearly was an error, either on their part in the article or mine, since Samuel Sunness is referenced as the owner from ‘37 onward on every other occasion. Glad we’re filling in some good information here!

In the early 1960s my father was the manager of the Jarvis. I remember seeing the 10 commandments, The apartment, Samson and Delilah and many more. Id cover my eyes with the parting of the red sea and the creation of the tablets by fire. Id help with the cleaning at closing time and be paid with a tiny cup of buttered popcorn where it was butter put on your corn and not the chemicals of today. My father was always in competition with The Crest which was managed by my grandfather until his death in 1975.

This opened on December 29th, 1913. Grand opening ad in the photo section.

If I remember, I believe that the Jarvis location became a Henry’s Hamburger joint. To me Henry’s far surpassed McDonalds, Burger King and anything else. I collect old movie tickets from Binghamton, JC & Endicott, places of my birth & growing up from the 1960s I have a Jarvis ticket in mint condition, Looking for Crest, Strand, Riviera& Sun Theaters to name a few Thanks

Henry’s was not in the exact location of the Jarvis. It was at the southwest corner of Clarke and Main Streets. And I do agree that Henry’s was better than the other offerings. I don’t believe Burger King was around then, all the locations in the area started as Carrols but became BK in the mid 70’s. Carrols Corporation still exists today, they are one of the largest Burger King franchisees with over 800 restaurants.