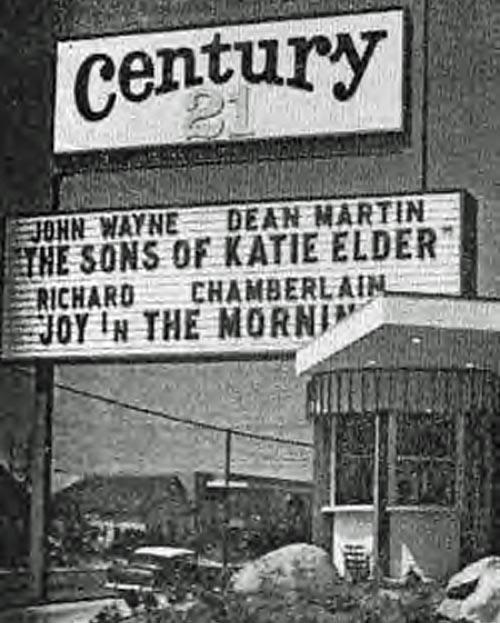 Originally opening June 30, 1965 as a single screen theatre for Stateside Theatres. This theatre was by my recollection rather grand by Orange County standards. I enjoyed many films there in the 1960’s including “Mary Poppins”, “The Sound of Music”, and “Thoroughly Modern Millie”. It was later twinned and closed June 28, 1979.

More information and photos can be found here:

Bill Kallay is a treasure to those of us who grew up in Orange County. My mind is swirling with amazement at the depth of research and the intense labor of love he has accomplished on the theaters of Orange County. The man deserves an award of some kind, like, I dunno, an Oscar or something.

Thanks Papibear for the nice compliment. Mike Coate, who is also co-owner of www.fromscripttodvd.com, is the other half of the research done on “70mm In….” He deserves a round of applause for his in-depth knowledge and editing expertise. :)

The “70mm In Orange County” project is really a labor of love, as you mentioned. It was an offshoot of the research we’d done on New York and Los Angeles 70mm engagements and theatres. I grew up in Orange County (before it was a catch phrase) and experienced going to most of these theatres. Mike and I thought it would be a good idea, while our memories were somewhat fresh, to catalog the them in print and with photos (if they were available). We’ll be adding some more new surprises to the OC section soon.

I haven’t checked in since shortly after I posted my first comments last December. I was thrilled to see the postcard (via the link provided by Bill Kallay). All I could say was “that’s it!” After reading the other comments I can remember going there in the late 70’s as a young adult to see movies. And I distinctly remember parking in the rear.

As a native of Anaheim and growing up a couple blocks away from the old Century 21 Theater all through the ‘60s, I know for sure that Knowlwood’s occupied what is now the burger restaurant in between IHOP and Taco Bell, not where McDonald’s is. That’s too far south. I remember seeing “Lost Horizon” in the early '70s.

Taco Bell is just north of the T intersection, so I think the theater was just a bit south, sort of half way between Taco Bell and McDonald’s.

At any rate, it was a nice theater and it’s sad to think it’s gone.

I believe Bill H is correct. The Knowlwood’s was located where the “restaurant of the week” building now stands; over the past ten years it’s rotated from chinese, to mexican, to burger, back to mexican, and to it’s current (07') sushi incarnation. The theatre was located in the area that is now Taco Bell, McDonald’s, and a rear property office complex.

Although this theatre bore the name Century 21, it was not a Syufy house and was not designed by Syufy’s architect of that era, Vincent G. Raney. Raney’s Century 21, 22, etc. designs for the Syufy/Century chain were domed. Statewide’s Anaheim Century 21 was not domed. The Century 21 Theater in Anaheim was designed by the San Diego firm of Tucker, Sadler & Bennett. It was one of four similar houses designed by that firm for Statewide Theatres. One of them, Cinema 21 in San Diego, has only recently been listed on Cinema Treasures. The other two (the Inland Theatre in San Bernardino and a theatre in Bakersfield) are apparently not yet listed here.

There was a Raney-designed Syufy domed theatre in Orange County, the Orange Cinedome, opened in 1969 as a twin screen (each in its own dome) house called the Cinedome 20 & 21. I guess they used that name because they found their “Century 21” name had already been taken locally by Statewide’s earlier theatre.

According to a 1974 newspaper ad now displayed on this page at the “From Script to DVD” website, the Cinema 21 was located at 810 N. Euclid Avenue.

Despite its name, this house was never operated by the Syufy family’s Century Theatres chain. Note that RonP’s comment of June 18, 2006, names the companies that operated this theater: Statewide, Loew’s, and General Cinema, and then the house was independently operated during its last year.

My father, Russell J. Banks, Sr. managed the Century 21 Theater from its opening on June 30, 1965 until its final closure on June 28. 1979. My brother and I attended Magnolia High School and we loved taking our friends with us to the movies. Hot dogs and popcorn were around 25 cents and the screen was so much bigger. Lines to get in sometimes went around the entire theater. A wonderful time in our lives.