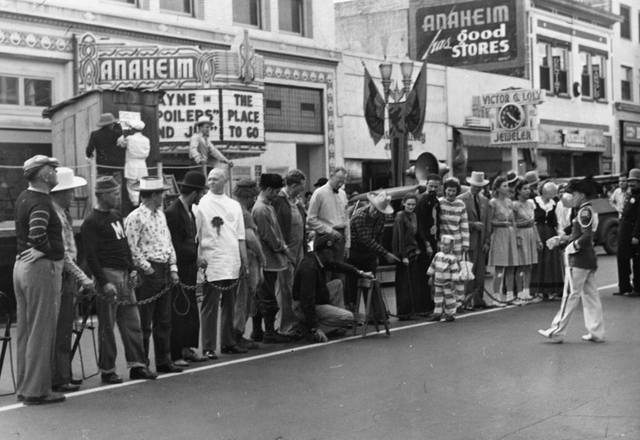 The Anaheim Historical Society says that the Fairyland Theatre was built in 1917 by John Cassou and designed by Eugene Durfee as a theatre primarily for motion pictures. An article dated May 18, 1922 from the Anaheim Gazette on file at the Anaheim Public Library, noted that the previous Saturday evening during vaudeville night a fire started in the operating room from a box of film. The audience of 800 in the sold-out house didn’t panic and in fact they refused to leave until finally persuaded to do so by the stage manager after the firemen had entered the building. Damage was $2,000 and the manager said the theatre would be up and running again in about a week.

The Historical Society says that during the early-1920’s the Fairyland Theatre was the scene of many Klu Klux Klan rallies. These rallies finally stopped in 1924 with the recall of four city trustees, alleged members of the Klan.

Sources say that of the four downtown theatres, including the Fox Theatre, the Grand Theatre and the Star Theatre, the Fairyland Theatre was the most “ornate and original”.

The theatre was taken over by Fox West Coast Theatres in 1933 and renamed the Anaheim Theatre. It continued its operation until 1951 when Fox closed it because of declining attendance. The Fox Theatre, just a block away, would remain open for about another 25 years until it was demolished in the mid-1970’s.

The Anaheim Theatre was taken over by Pussycat Theatres and it was taken over by the city in 1983, when demolition plans were announced, its old lobby was used as a jewelry store and the auditorium, with its seats removed, was used for storage.

The Fairyland and the Fox were both demolished in 1973, when the city razed over ¾ of the old downtown for a fancy new mall; which turned out to a plain strip shopping center I was in the jewelry store many times; and when it was demolished, I went inside the theater part; and took out a chandalier; and donated (left it at the back door) of the city museum. The Anaheim Bulletin reported at that time, that the fancy trim around the inside of the theater, which was thought to be metal or something fancy turned out to be plaster. I do can tell you that instead of a sloped floor in the theater, it was stepped; which I had not seen previously, nor have I seen since. My high school ring and band pendant both came from the jewelry store in the lobby. I knew of the KKK meetings from my grandparents. I guess way back when, my grandfather went to one of the meetings, though he was not a member; nor was he ever. If I remember right, the stage had a cement floor. It was on the South side of the street; with it’s entrance facing North. The information above says 800 seats; but, I thought it looked awful small for 800 seats. It was not that wide of a theater; nor was it deep.

Ron:
I agree that Fairyland Theatre is a much more interesting and historic name for this theatre. The site managers here though prefer to title theatres by their last/latest name or occasionally by the name it held the longest length of time and is most known by.

I think it’s amusing that a theatre named Fairyland and the ‘campyness’ of Disneyland should come together at all in Anaheim, Orange County, given the red-neck reputation that the area has world-wide. lol

Fox West Coast reopened this house as the New Anaheim Theatre on Thursday, July 8, 1937, according to Boxoffice Magazine of July 10 that year. The item said that the house had “…been closed for several months, undergoing extensive remodeling.”

The main feature playing at the theatre in ken mc’s picture was John Wayne in “The Spoilers”.