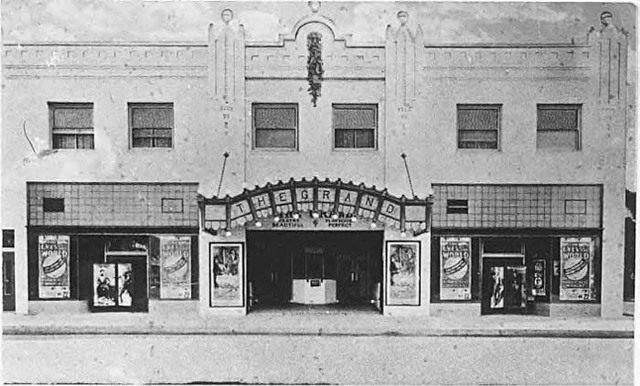 According to old newspapers on file in the local history room at the Anaheim Public Library, the New Grand Theatre was opened by Mrs. Sadie Frohman on June 12, 1916 with “Ramona”. It was built at a cost of $35,000. It was touted as being completely fireproof and as having a ventilation system where the perfumed air is exchanged every three minutes. In addition to having room for 700 patrons there were two stores on the street and sixteen offices on the second floor. Mr. Mozart, the manager said that it’s customers will be people who have been motoring to Los Angeles but now can see the same pictures at reduced rates and not have to forego the trip back in the middle of the night.

The New Grand Theatre predated another Anaheim theatre, the California Theatre built in 1925, which later became the Fox Theatre. It always remained an independent and by 1940 it had become known just as the Grand Theatre.

Here is part of an article in the 6/5/85 edition of the LA Times, on the passing of Vincent Miranda:

Vincent Miranda, a one-time busboy and waiter who founded the controversial chain of Pussycat adult theaters nearly 25 years ago, died Sunday at Cedars-Sinai Medical Center of cancer. He was 52.

Miranda, who bought his first theater in Huntington Park in 1961 to boost business at his adjacent restaurant, rapidly expanded his chain when he discovered that it cost no more to advertise several theaters than one.

He was arrested more than 60 times over the years on obscenity charges, but was convicted only once, in 1977 in San Bernardino for a film called “Sex Freaks”.

The Grand makes a few appearances in various issues of Boxoffice Magazine from 1938 to 1944. First, in the June 25, 1938, issue there is this brief item: “Hyman ‘Doc’ Barsky has assumed ownership and will reopen two dark houses —the Placentia, a 300-seater at Placentia, and the Grand, in Anaheim, a 600-seater —with both scheduled for renovation.” The item also mentions that Fox West Coast had been the lessee of the Grand.

Then from Boxoffice of January 21, 1939, comes this breaking news: “Closed for the last 12 years, the Grand Theatre will be reopened February 1 by Doc Barsky and Bob Sproul on a lease relinquished by Fox West Coast. Sproul, who operates the Brentwood Theatre in Santa Monica, will be the active manager at the Grand.”

It sounds as though Fox West Coast had been leasing the house for years only to keep it closed. But maybe the copy writer at Boxoffice mistakenly wrote “12 years” in place of “12 months.” Does anybody know if the Grand vanished from theater listings from 1927 through 1939?

Then, the July 29, 1939, issue of Boxoffice announces a shakeup at the Grand: “H.H. Barsky has purchased the Grand Theatre from Bob Sproul and has closed it temporarily for alterations and redecorating. He will open the house at a 15-cent admission scale.”

As the earlier reports suggest that Barsky and Sproul were in a partnership, this item must have meant that Barsky had bought Sproul’s share of the business. Perhaps they’d had a tiff.

But it looks as though Mr. Barsky soon had buyer’s remorse. The April 6, 1940, issue of Boxoffice reveals the next turn of events in the Grand saga: “J.E. Trott has purchased the Grand, a 950-seater, from H.H. Barsky.”

As the reported seating capacity had increased from 600 in 1938, Barsky and/or Sproul must have done extensive remodeling- or crammed in a lot of really small seats.

The Grand soon found itself with yet another new owner, and then another. The June 17, 1944, issue of Boxoffice reported that Morris Rabwin had purchased the Grand from A. Blanco. Meanwhile, according to the same report, A. Blanco had lately been palling round in Tijuana with none other than “Doc” Barsky. Boxoffice fails to provide further details about their relationship. I guess Bob Sproul was entirely out of the picture by then.

With its sale to Mr. Rabwin, the Grand vanishes from the pages of Boxoffice, as far as I’ve been able to discover. I can find no mentions of it as the Garden, either. Sic transit gloria.

Here is a brief article about the Grand Theatre from the July 1, 1916, issue of The Moving Picture World:

“AT Anaheim the New Grand theater, at East Center and Philadelphia streets, has opened and will give as its first production ‘Ramona,’ produced by the Clune company. The New Grand is one of the most beautiful theaters in Southern California. The building was erected by Mrs. Sadie Froham at a cost of $35,000. Although it contains two storerooms on the ground floor and sixteen office rooms in the second story, these are secondary to the theater and nothing in its construction was sacrificed to them. The room is 62 by 140 feet in dimensions, has a cement sloping floor and will seat 700 persons. The chairs are in circular rows, and are twenty inches wide.

“The house is under the management of Edward Mozart. Mr. Mozart has been in the theater business for more than forty years. He declares the New Grand is going to acquire a reputation for giving nothing but the best films that can be procured for money, and expects to maintain it. He is starting with one of the best presentations in filmdom and one that especially appeals to this region.”

The Grand Theatre was on the southeast corner of Center and Philadelphia Streets. When Lincoln Avenue was built, around 1980, it incorporated many parts of Center Street, but not the part where Center crosses Philadelphia. The correct modern address for the Grand Theatre would thus be the same as its historic address, 305 E. Center Street. I’ve set Street View to the parking lot that now occupies the site of the Grand Theatre. The Google Maps pin icon is, for now, still a block north of the Grand’s actual location.

I live at Center and Philadelphia, where there is a Ballet School and Cultural Center that looks very similar to the old pictures of the Grand Theatre. Was the building not demolished, but re-purposed for this? When I Google 305 E Center St., it takes you across the street to Washington Park, but if you click the view across the street, you can see the ancient brick building.

Wanderer: The Grand Theatre was on the southeast corner of Philadelphia and Center and has been demolished. The Downtown Community Center, on the southwest corner, at 250 E. Center, is actually a modern building. It was completed in 1998, but it was designed to resemble buildings of the Craftsman style, which was popular in the early 20th century.

I forgot to include this link to the Downtown Community Center’s web page.

The Grand was still standing in 1980, as seen in this view at Historic Aerials. The auditorium and its stage house are easily recognizable.

While the theatre was shut down by the city in 1983, the legal battle between the City of Anaheim and the Pussycat chain continued until the Summer of 1986; at which time the city paid $800,000 in an out of court settlement.